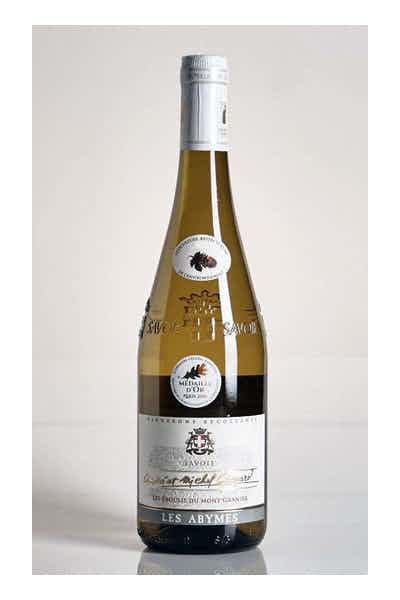 The Savoie is a picture of fairy-tale perfection: snow-capped peaks, green rolling hills, wildflowers, and cold, sparkling mountain streams. This idyllic region hugs the western Alps, where Michel Quenard farms twenty-two hectares of vineyards along the steep, terraced slopes of the Coteau de Torméry around Chignin. The limestone scree that dominates this vineyard land has brought great diversity to the soils, and consequently, the wines. His grandfather started the domaine in the 1930s. Though he slowly increased the vineyard holdings, he also sold off most of his wine in bulk. It was not until 1960 that Michel’s father, André, began bottling under their own label. Michel joined the domaine in 1976. Today, he is joined by his two sons, Guillaume and Romain. While they are far from the only Quenards in Chignin, they are certainly the most well-known—perhaps this is due to the severity of their terrain and the quality of wines it produces. Andrew Jefford writes in his contemporary classic, The New France, “Michel Quenard and his father André are masters of the Bergeron grape, known in the Rhône Valley and elsewhere as Roussanne. They argue it should be limited to the best and steepest local sites where it can ripen fully, like the Coteau de Torméry, giving wines of real texture and perfume as it does so.” (p 122). We think it is one of the most unique and beautiful renditions of Roussanne in the world. Despite the domaine’s proximity to the Alps, the vineyards enjoy a surprisingly warm microclimate with southern sun exposure. Fig and olive trees are also found among the vines, unusual for such a snowy region. There are sixteen crus in the Vin de Savoie designation, and each commune is known for a different grape varietal. Michel’s vineyards are planted to some of the region’s best known: Bergeron, Jacquère, Mondeuse, Altesse, and Pinot Noir. Michel bottles eight different cuvées, seven of which are still, and the other a sparkling Vin de Savoie Brut, which is made in the méthode champenoise. The minerality of Michel’s vineyards expresses an alpine freshness and liveliness in his wines. His cuvées go beyond the simple “eclectic” that categorizes wines from the region; whether they are quaffed or savored, they are all unique revelations that reflect the complexity of their terroir and the fine artistry of this master vigneron.