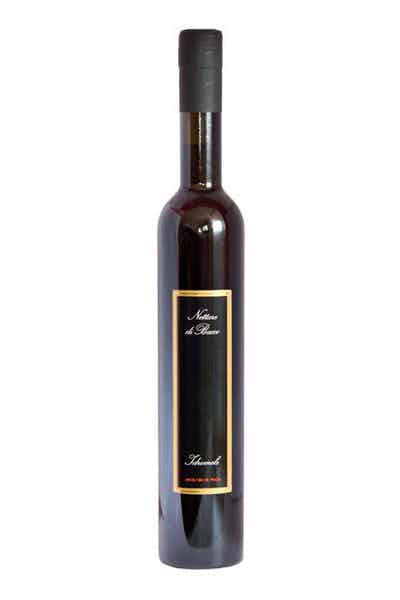 Hydromel is considered as the oldest alcoholic liquor all over the world. 3000 years ago the Mayas used almost all their honey to product this liquor, which was drunk by the richest social classes of this civilization. It was produced by the Egyptians, too, and then by the Greeks and Romans. In Greek mythology it is considered as “the drink of the Gods”. Nettare di Bacco is our Hydromel. For its production we must dissolve a required amount of select honeys in water and then the fermentation has to take place in steel vessels. When all the honey sugar are changed into alcohol. (14,5 degrees), the drink is put into special oaken casks at least for one years. After the bottling, too, our hydromel keeps on growing rich of other flavours, which exalt its taste. Nettare di Bacco has been often offered during tastings and taste-workrooms regarding either some honey products or other esteemed ones. There it has been often appreciated very much by famous sommelier, who have considered it as the perfect drink to have as with milk or fondant chocolate as with all the chocolate products which are difficultly linked with any more drink. Nettare di Bacco can be happily consumed with “Pecorino” cheese, too, as well as with Parmigiano and Grana cheese, especially covered with some honey, possibly of the Mediterranean Heather honey.