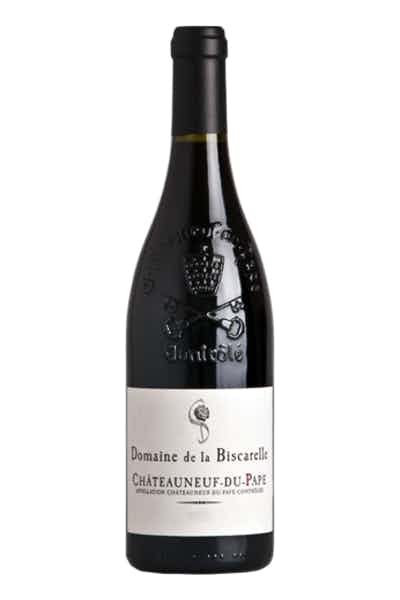 Grape varieties: 89% Grenache, 5% Syrah, 3% Cinsault, 2% Mourvèdre, 1% Terret Noir (composition varies by vintage) Domaine de la Biscarelle was born when, in 1984, GérardBouyer decided to leave his family domaine and create his own winery. Through hard work and determination, he was able to build a domaine with beautiful vineyards filled with old vines. Domaine de la Biscarelle is located in the prestigious area of Les Grès, within the commune of Orange. The vineyards consists of 22 hectares of vines, 5 of which are appellation Châteauneuf du Pape, in the lieux-dits of Palestor and Cabrières. Domaine de la Biscarelle’s Châteauneuf vines range in age from 30 to 100 years old, with several parcels that were planted in 1904. The remaining 17 hectares are split between two different terroirs in appellation Côtes du Rhône Villages. The Côtes du Rhône Villages vineyards are comprised primarily of 40 to 80 year old vines. The oldest of these Côtes du Rhône Villages vineyards, was once within the boundaries of Châteauneuf du Pape, but was later reclassified as Côtes du Rhône Villages when the boundaries were redrawn in 1936. Until the 2009 vintage Gérard sold all of his grapes and wine to top négociants in the Rhône Valley. Today Gérard’s son-in-law, Jérôme Grieco, is now in charge of the winemaking, and vineyards at the domaine. Jérôme has worked with Gérard at the domaine since 1996. However, until recently, he kept his day job at the Autoroutes du Sud de la France. In 2004 Jérôme decided that he wanted to make the domaine his full-time career. Thus began a long transition, which finally culminated with Jérôme’s first vintage in 2009. The first, and most important change, that Jérôme made was the decision to start bottling their own wine. Jérôme, in opposition to modern winemaking trends, neither destems his grapes, nor does he oak age his wines. The wines, however, are astonishingly elegant and balanced. Jérôme’s philosophy is to make his wine in the vineyard, rather than making corrections in the winery. He wants as little as possible to come between the flavors and aromas of his great terroir, and the final consumer.