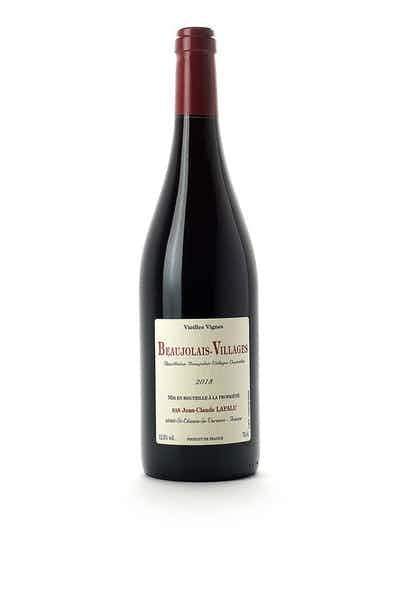 COUNTRY France REGION Beaujolais APPELLATION Beaujolais Villages WINE TYPE Red VARIETALS Gamay ORGANIC Certified BIODYNAMIC Practicing VINEYARD From one of the most precocious Bojo Villages sectors, which is among the first to be harvested in the region. Vines are 45+ years old and are densely planted so challenging to work. ORIENTATION Exposition varies SOIL Sandy, shallow topsoil on granite VITICULTURE Ecocertified (organic), in biodynamic conversion VINIFICATION Grapes are chilled for 1 day, then into tank for carbonic maceration/fermentation for 12-14 days with indigenous yeasts. AGING Aged 5-6 months in tank, no fining, and no filtration (except the last 10% of the tank). 10-15 mg SO2 at bottling PRODUCTION 1,000 cases anually NOTES A top-tier old vine Beaujolais-Villages from a densely planted, early ripening sector. This super value is supple, succulent and very pretty. Jean-Claude Lapalu is among the most respected and revered growers in Beaujolais, a darling of the Paris wine scene, and a leader in the so-called Natural Wine movement in France. He was a bit of a late-comer, assuming his unique place in the Beaujolais nexus between the generation of his peers (Breton, Dutraive, Foillard, Métras, Thevenet) and the young generation today. He farms the same vines that were once farmed by his father and grandfather. Though, as was common back in those days, they sold their wines and/or grapes to the local cooperative. In 1995, at the age of 33, Lapalu’s inquisitive nature and desire to try new things resulted in his decision to bottle his own wines. Lapalu’s 9 hectares of largely east and southeast facing vines are scattered from Mont Brouilly down through the rolling hills to his home village of Saint-Etienne-la-Varenne, the "gateway to the Crus”. Brouilly is the southernmost Cru and is more influenced by the Mediterranean warmth than its northern neighbors. Perhaps this “southern spirit” is an explanation for why Lapalu’s earliest natural wine influences — in addition to the writings of Jules Chauvet — were from Provence rather than just a few miles north. He remembers tasting Henri Milan’s 1996 “Clos Milan”, as well as wines from Richaud and Gramenon, and feeling inspired to experiment with his own wines. His curiosity and restless creativity took hold. “When I started, I wanted to shock”, he says. He began to question everything in the vineyard and cellar, abandoning conventional farming and all of the winemaking additives he had learned to employ at wine school. He laments that he had few guides and admits that modesty kept him from approaching the likes of Lapierre and other natural Beaujolais growers. But after his own wines began to garner attention beyond the borders of Beaujolais, he soon found a community of like-minded vignerons in one of the world’s most collaborative wine regions. As of the 2010 vintage, the domaine is certified organic through Ecocert and biodynamic methods have also been incorporated. Lapalu is gifted in old vines, many of which are between an average of 50 and 100+ years of age. His patchwork of cuvées are a result of years of experimentation, with Beaujolais-Villages VV and Brouilly VV representing approximately 60% of his production. All grapes are hand-harvested, of course, and chilled for 24 hours before going to the tank for fermentation. Vinification varies by cuvée (carbonic vs. semi-carbonic) with whole clusters that macerate for 10-12 days. A 24-hour pressing is customary and done with a traditional vertical press from the late 19th century. Depending on the cuvée, the wines are raised in either glass-lined concrete tanks, or used barriques or tonneaux. During the élévage, many of his cuvées see little or no sulfur, and when they do, it is usually only a small dose at bottling. Nonetheless, he is not dogmatic on this point, but he believes he can make great wines without it, that one can make “natural wines that are correct." Lapalu’s perpetually evolving tastes have heavily influenced his assorted cuvées. He thinks about his range of wines as either wines to be drunk standing up, or wines to be drunk sitting down. Generally, his entry wines fall into the first category, and his parcellaire cuvées into the latter. Today he is more interested in elegance than extraction, and fruit takes precedence over tannin. His Eau Forte cuvée — a carbonic blend of Beaujolais Villages and Brouiily — is the ultimate expression of this sentiment as it is his most lithe wine in the lineup, with an impressive persistence and length. His Cuvée des Fous is a compelling cuvée made mostly from vines planted in 1900, the oldest in the estate's holdings. It is deep, dark and dominated by black cherries, one of Brouilly's signature aromas. While Lapalu generally favors a more hands-off approach, he admits that the terroirs of Côte de Brouilly and Les Croix des Rameaux require more attention in vinification. Lastly, the amphora-aged Alma Mater, which is all desteemed and spends 7 months on the skins, is an exploration in the energy exchange between wine and vessel, and is a veritable outlier in the Lapalu lineup (though by no means a “freaky”-style wine as these examples can be). Specific cuvées aside, Lapalu has created a collection of wines that are lively, supple, sinuous and utterly delicious. An hour listening in Lapalu’s cellar might contain more information and anecdotes than a week-long Beaujolais masterclass. He is candid, generous, exuberant and an unparalleled story teller. It is easy to see that he is at once disciplined and intentional, yet not afraid to challenge the status quo. In fact, he might even take pleasure in it! He is playing an important role in the Beaujolais Renaissance by both honoring traditions and pushing the envelope. We are thrilled to be along for the ride!