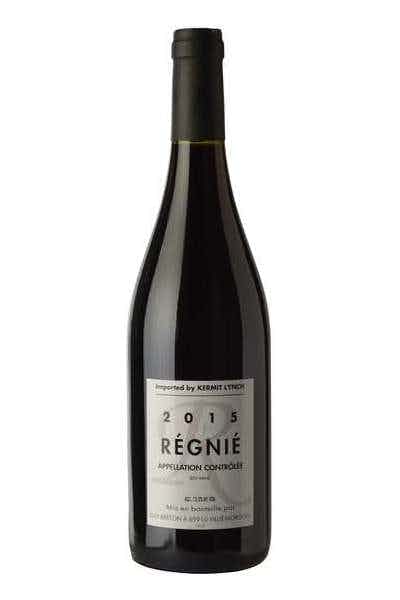 Régnié: • First produced in 2008, the Régnié is sourced from the hills between the Côte de Brouilly and the Côte du Py of Morgon, around the village of Régnié-Durette. • Guy’s grandfather handed down the two parcels that go into this wine: one with 100-year-old and the other with 35-year-old vines. The shallow soil of sand and decomposing stones gives the vines easy access to the bedrock, creating firm wines with more grip and acidity than in Morgon. Guy Breton is known by his friends as Petit Max – though he is anything but petit, by the way. He took over the family domaine from his grandfather in 1986. Until that point, the family was selling their fruit to the large cooperative wineries which dominated the region and were gravitating towards a uniform style. The rise of imported yeast cultures to impart flavor and aroma, the use of high-tech carbonic maceration, and the widespread commercialization of Beaujolais Nouveau debased the region’s reputation, and Beaujolais came to be seen as one-dimensional, lacking any expression of the native terroir. Following the example of traditionalist Jules Chauvet, Guy and three other local vignerons, Marcel Lapierre, Jean-Paul Thévenet, and Jean Foillard, soon hoisted the flag of this back-to-nature movement. Kermit dubbed this clan the Gang of Four, and the name has stuck ever since. The Gang called for a return to the old practices of viticulture and vinification: starting with old vines, never using synthetic herbicides or pesticides, harvesting late, rigorously sorting to remove all but the healthiest grapes, adding minimal doses of sulfur dioxide or none at all, and refusing both chaptalization and filtration. The end result allows Morgon to express itself naturally, without make-up or plastic surgery: rustic, spicy, loaded with schist minerals and at the same time, refreshing and deep-down delicious. Breton’s domaine is comprised of three hectares (only 7.2 acres), eighty percent of which lies in the appellation of Morgon, around the village of Villié-Morgon. The vines range in age from 8 to 80 years, with the 80-year-old vines dedicated to the “Vieilles Vignes” cuvée. Guy’s property is located in the microclimates “Saint-Joseph” and “Grand Cras,” where the naturally low pH of the soil creates favorable conditions for Breton’s sulfur-free vinification.