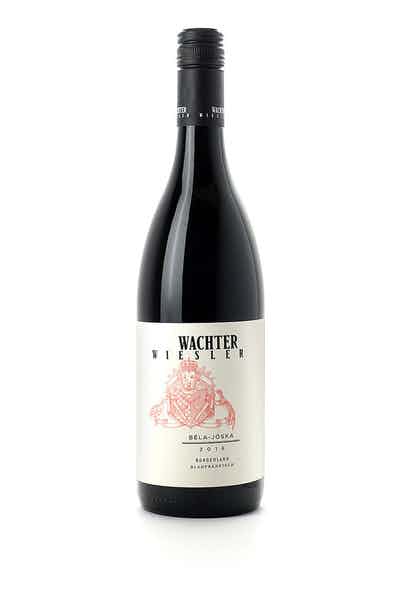 The winery named this Blaufränkisch after family fathers Béla Wachter and Jóska Wiesler; the fruit is from each family's vineyards in Deutsch-Scheützen and Eisenberg. The vines average between thirty and fifty years old. Aged for thirteen months in large wooden barrels (500 – 3000 liters). Christoph Wachter began working at his family winery in 2008 when he was just twenty years old. He took over full responsibility in 2010, and now farms sixteen hectares of vineyards in Südburgenland, in the towns of Eisenberg and Deutsch Schützen. The biggest difference between Burgenland and Südburgenland is the soil and micro-climate. In Mittelburgenland, the area was under the ancient Pannonian sea and the soil is mostly limestone. In Südburgenland, the vines grow in primary rock, and the most prized terroir is the green schist of the Eisenberg hill, regarded as one of the finest sites for producing Blaufränkisch in Austria, giving wines of great finesse and focus. The Eisenberg DAC includes wines from the surrounding villages, including Deutsch-Schutzen, where you find iron rich loam and clay on top of the green schist subsoil. Deutsch-Schützen’s soils are dense with a deep layer of loam, resulting in dark and spicy wines with soft tannins. Südburgenland is cooler than Mittelburgenland and there are rolling hillsides, small mountains really, called the pre-Alps, topped with forest; this regulates the temperature, another aspect of the micro-climate of Südburgenland. Harvest here tends to start two weeks after Mittelburgenland. Sudburgenland, with 500 hectares planted is considerably smaller compared to Mittelburgenland with 2,100 hectares. Eisenberg wines are very unique expressions of Blaufrankisch. When Wachter started in 2010, he stopped using herbicides and pesticides entirely. Today, he is one of only three producers in Südburgenland who is farming organically. And in 2012, he studied biodynamic farming for two years and he applies some biodynamic techniques today. He allows the weeds to grow in his vineyards, as they attract beneficial insects and eventually return to the soil as nutrients themselves. Rather than add fertilizer, he leaves the vines to extract what they need from the soil itself, thus instilling the wines with minerality and allowing them to express their unique terroir. Only native yeasts are used in the cellar. Wachter ferments his wines twenty to thirty percent whole-cluster, and ages in large barrels that allow the wines to mature gracefully without obscuring them with oak flavors. In the summer of 2019, we were able to meet with Wachter in Eisenberg and we tasted through his new 2017's. He modestly admits that this is perhaps the best vintage that he has made to date. It finally was the first "normal" vintage since 2012 with great weather - no hail or drought - the first vintage since 2012 with great quality and quantity. It allowed Christoph to launch an idea that he's had in mind for a few years. In addition to his single vineyard wines, he will bottle two village level wines, one from Deutsch Schutzen and one from Eisenberg. And he made four single-vineyard wines: Weinberg, Ratschen, Saybritz, and Reihberg. His cuvee Bela-Joska remains the flagship of the winery. It's named after his two grand-fathers and the cuvee was first bottled in 1992. The Wachter-Wiesler wines are some of the most exciting red wines made in Austria today. Wachter-Wiesler wines have silky texture, floral aromatics, great energy, and elegance - truly Blaufränkisch at its finest.