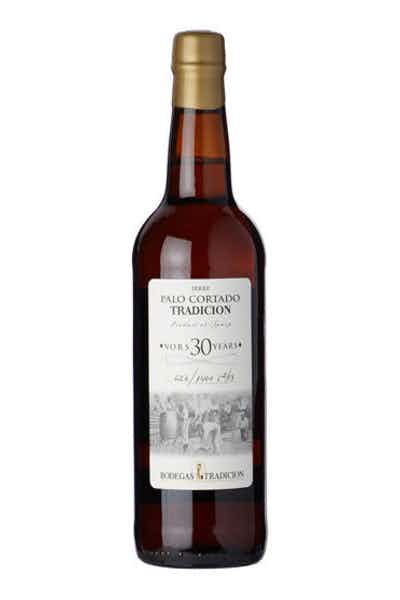 "The Palo Cortado solera from Bodegas Tradición has an average age of around 32 years (believe it or not, this makes it the youngest wine in their dry range). Every year, no more than +/- 2000 bottles are taken out of this solera, in different sacas throughout the year. This release had 477 bottles. The Palo Cortado solera started with stocks bought from Bodegas Croft (their 1970 and 1982 vintages) and 18th Century casks from Bodegas Domecq, which obviously helped to get a high average age right from the start. Back in 2012, Bodegas Tradición sold one of their Palo Cortado casks (approximately 50 years old) to the Scotch whisky distillery Glengoyne. They filled the cask with one of their whiskies (a 12yo 1999 vintage) and let it mature further for one year. It was taken out and bottled in 2013 for the German market, where it is presented in a wooden box containing a bottle of both the Glengoyne and the Palo Cortado." -SherryNotes