Beer, Wine, and Spirits
Delivered in Under 60 Minutes.

A glass of prosecco makes any event feel like a celebration. In a cocktail, that sweet yet bubbly taste provides a cheers-worthy light and fizzy feel. Naturally, we rounded up five of the best prosecco recipes from our Top Shelf Bloggers to share. So whether you're relaxing at home, party planning or looking to add to your cocktail repertoire, these five star recipes will add to any and all of your occasions. "If you're in need of the perfect patio sipper, look no further. Full of floral and fruity notes, this lavender-peach prosecco cocktail is spiked with a citrus-forward gin for an extra kick."
- Amanda, Burrata and Bubbles

Directions:
To make the lavender-peach syrup, combine the peach slices in water, sugar and dried lavender in a medium sauce pan. Bring to a simmer over medium heat and stir to help dissolve the sugar. Continue to simmer for 1 minute. Turn off the heat and allow to steep for another 10 minutes. Mash the peaches in the syrup. A potato masher works well for this. Strain over a fine-mesh sieve and chill.

Pour lavender-peach syrup and citrus-forward gin into a white wine glass and stir. Add ice and top with prosecco. If desired, garnish with peach slices. Enjoy! "The Negroni Sbagliato is something like a cross between a traditional negroni and an aperol spritz. In Italian, "sbagliato" means, "mistake." This drink is supposedly the result of a bartender who accidentally grabbed sparkling wine instead of gin. It combines the sweet effervescence of a spritz with the pleasant bitterness of the negroni."
- Tux, Brooklyn Homemaker


Directions:
Fill a rocks or old fashioned glass with ice and add campari and vermouth. Top off with prosecco and gently stir to combine. Garnish with an orange twist or slice if desired. 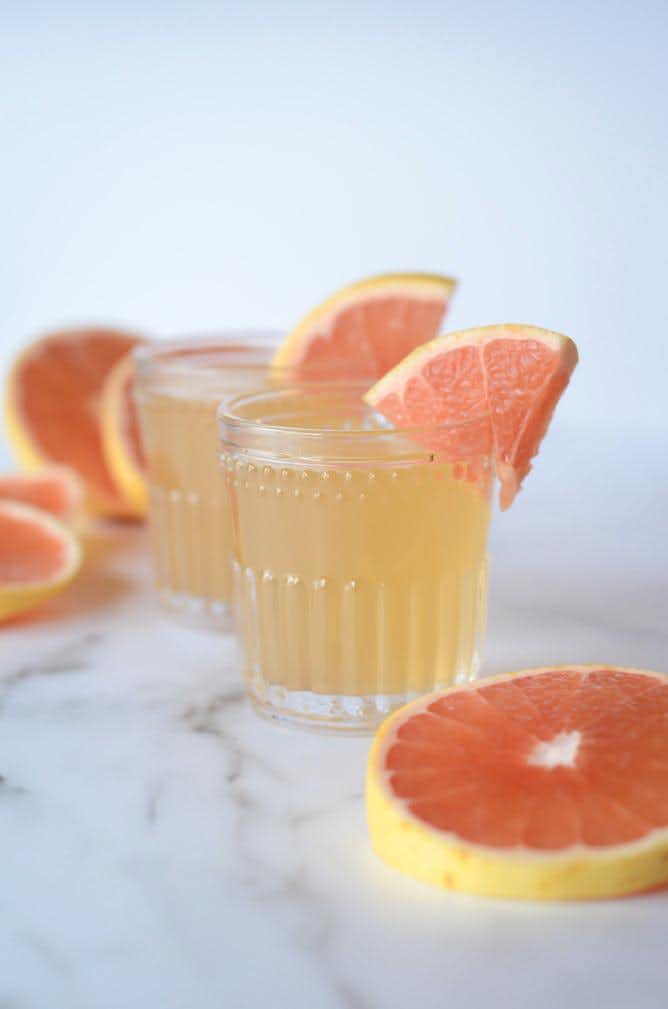 
Directions:
Place honey and 1 ounce water in a microwave-safe bowl or cup and microwave for 15 seconds, or until the honey is dissolved into the water. Combine honey mixture, fresh grapefruit juice, ginger beer and bourbon in a cocktail glass. Top with prosecco. Add grapefruit wedge for garnish and serve immediately. "A French 75 already feels like a fancy cocktail but here is a slightly more dressed-up version. In addition to having a unique violet color, this drink is a delicate balance of floral & citrus flavors."
- Jordan, High Proof Preacher


Directions:
Combine ingredients (except for bubbles). Shake with ice. Strain into a champagne flute and top with prosecco. Garnish with lemon zest & something floral.

*What is Shrub? It's a classic (like 15th century kind of classic) form of preserving fruit using vinegar. When used in cocktails, it creates a juxtaposition of sweet and acidity with a little bit of a bite. 
Directions:
Combine blackberries and coarse sugar in a small glass or cocktail shaker and muddle together well. Strain juices through a cheesecloth and pour into a champagne flute; you should have about ⅝ ounces blackberry juice. Add lemonade to flute and top with prosecco. Garnish with extra blackberries and enjoy!

​All About Prosecco Wine

The most popular sparkling wine in Italy, Prosecco comes from the country's Conegliano Valdobbiadene -- we don't know how to pronounce that either -- region in Veneto. In other words, it comes from just north of Venice.

How Is Prosecco Produced?

The main grapes in this sparkling wine are Glera grapes, but they won't mind if you call them Prosecco. Winemakers use the Charmat sparkling method to produce prosecco wine, which calls for a second fermentation in giant steel tanks. This is a much more efficient and less expensive method than the one used for Champagne, and it produces a slightly less bubbly sparkling wine. In fact, Prosecco's bubbles rarely last as long as those in a Champagne flute.

Is Prosecco Dry or Sweet?

Prosecco is known for its fruity and aromatic yet dry taste. Sound complex? It is! Many people find that it's lighter and sweeter than Champagne, which often has a yeast-driven, nutty flavor. However, not every bottle of Prosecco is sweet. When you're shopping for sparkling wine, you'll choose among these three types of Prosecco:

Brut is the most popular, and it often seems sweeter than it really is, thanks to its notes of pear, melon and honeysuckle. Extra dry Prosecco might be less popular, but it offers the ideal balance between the grapes' acidity and slight sweetness.

Perfect for those who don't like to be tied down by rules, Prosecco can be enjoyed any way you want, but you should always serve it in a tulip glass. This will help the bubbles last longer while capturing the Prosecco's fruity fragrance. Always chill Prosecco before pouring, and serve it cold, or around 40 degrees.

What to Pair With Prosecco:

Throw on your sunglasses, grab a brunch menu and get ready for morning drinking. Enjoy your Prosecco straight or mix it with orange juice for the ideal brunch beverage. If the bubbles have you feeling fancy, go for fruit-driven appetizers like prosciutto-wrapped melon and fresh seafood such as oysters or shrimp cocktail. For a fun twist, Thai dishes such as pad thai or vermicelli noodles pair exceptionally well with this sparkling wine.

Is there a difference between Champagne, Prosecco, and Cava?

Yes. Production method, region, and grape variety are what set these three sparklers apart. Champagne is produced within its namesake region of France via the traditional method, meaning the wine undergoes its secondary fermentation in bottle. Chardonnay, Pinot Noir, and Pinot Meunier are the permitted grape varieties, and the wine generally sees extensive lees aging prior to release.

Prosecco, on the other hand, finds its home in the Veneto region of Italy, produced from the Glera grape. Unlike the traditional method, Prosecco gets its bubbles from the Charmat method, otherwise known as the tank method. Grapes destined for Prosecco undergo their secondary fermentation in tank, which traps CO2, giving way to a youthful, coarse bubbled wine, usually meant to be consumed in its youth.

Cava, Spain's claim to sparkling wine fame, is produced via the same method of Champagne, in the heart of the Penedes region of Catalonia. Aging requirements are slightly less/looser than that of Champagne, and the grape varieties here are different; in the world of Cava, Xarel-lo, Macabeo, and Parellada reign king.

How to identify a good bottle of Prosecco?

Like most wine, Prosecco comes in an array of quality bottles, from inexpensive, basic bubbly, all the way to complex, age-worthy sparkles. When looking for a higher quality bottle of Champagne, look one step further than the Prosecco DOC and seek out the Prosecco Superiore DOCG, hailing from Veneto's Conegliano Valdobbiadene region. The appellation is located just 50 km from Venice, encompassing a plethora of rolling hills, just 100 km away from the Dolomites. Under the Prosecco Superiore DOCG, grapes must be hand-harvested from a particular vintage (as opposed to the broader NV designation), and are additionally classified based on residual sugar content. Looking for the cream of the crop? Check out bottles from Cartizze, Conegliano Valdobbiadene's equivalent of a 'Grand Cru' designation.

So what are you waiting for? Buy prosecco online through Drizly at a great price and have it delivered directly to your door. Cheers.