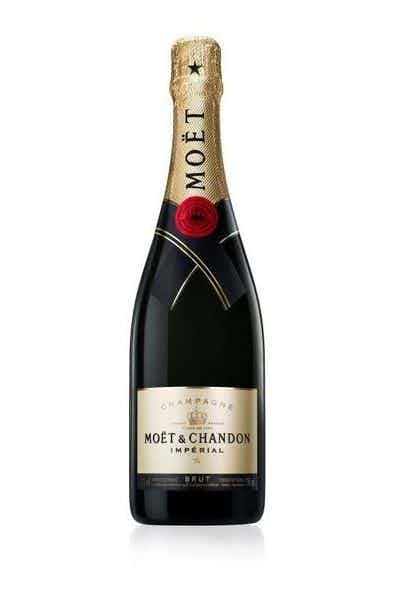 Moët Impérial is the House's iconic champagne. Created in 1869, it embodies the unique Moët & Chandon style, a style that distinguishes itself by its bright fruitiness, seductive palate, and elegant maturity.

Yes. Since 1869, Moet and Chandon Imperial has been known as the brand’s signature Champagne. It’s consistently classified as a luxury beverage because of its fine bubbles and crisp nature. Moet and Chandon itself is the world’s best-selling Champagne brand, too: millions of bottles are sold each year. This speaks to the high quality of this beloved drink that is often associated with celebratory occasions but is more and more just the standard Champagne many choose to have in their homes. It’s a favorite among celebrities, dignitaries, and all fans of fine sparkling wine.
Moet Imperial is Champagne, which is a sparkling wine normally made from a mix of Pinot Noir, Pinot Meunier, and Chardonnay. It’s described as “golden straw yellow” in color and is traditionally best paired with steak, cheeses, strawberries, or completely on its own. Moet Imperial is made in the Champagne region of France and is what Moet and Chandon is best known for. Moet Imperial is not sweet but does have a fruit-forward taste that complements the drink's dry nature. When you take your first sip, you’ll be greeted with flavors of green apple and citrus, along with a taste of fresh nuts and lots of small bubbles to create a soft effervescence.
The word Imperial in the name of this libation is said to come from Napoleon Bonaparte. He is rumored to have been a fan of Moet and Chandon's sparkling wines during his time of rule in France. Beyond that, Moet and Chandon’s line of Imperial Champagnes is the brand’s line of signature drinks—and they are what most people expect when they pop open a bottle. The Imperial line is also the brand’s driest options - their dry nature comes from the small amount of sugar that is present in the beverage once it’s bottled and ready to pour.
Yes. Moet and Chandon Imperial Champagne have long been known as one of the world’s most impressive beverages. For any drink enthusiast, Moet is a great brand to receive and is probably a brand they aren’t buying for themselves too often due to its celebratory nature. It’s even a good gift for those less familiar with the brand due to its popularity on TV shows, in movies, and in the lyrics of many top 40 songs. It’s an aesthetically pleasing bottle, too, meaning it will look great on bar carts and in liquor cabinets (and even on the table during a birthday party!).