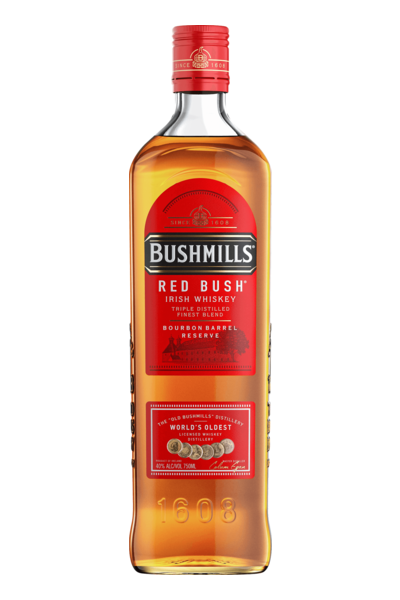 Bushmills Red Bush Irish Whiskey
Shop Now
Bartender Reggie Cunningham of the Bushwick Country Club bar in Brooklyn is credited with naming and popularizing the Pickleback shot in May 2006 after a customer requested a drink of pickle brine. Reggie suggested a shot of whiskey first, followed by the shot of pickle brine.The unusual combination of whiskey and pickle juice has become a favorite at bars everywhere since.

For a fun twist, follow along to learn how to make pickle shot glasses for your next round of Pickleback Shots.

The Dirty Martini is a drink for olive lovers. This salty and briny martini made with gin or vodka is a classic cocktail lounge favorite. It can be served on the rocks or straight up in a chilled glass. The preferred olives are typically extra large Spanish olives stuffed with pimento.

The ultimate cocktail for every meal! Why have a mimosa or bloody mary when bacon could be in every component of brunch. Beer for lunch? Who needs it when your cocktail pairs perfectly with your bacon burger. Wine for dinner? Not when you're having a bacon wrapped filet and need the perfect drink to match.

This take on the Classic Bloody Mary uses tequila in place of vodka. Tequila has a more bold flavor that pairs well with extra spicy tomato juices.

We substituted maple syrup for sugar in this seasonal take on an old fashioned. It will give the drink a more smooth and earthy flavor.