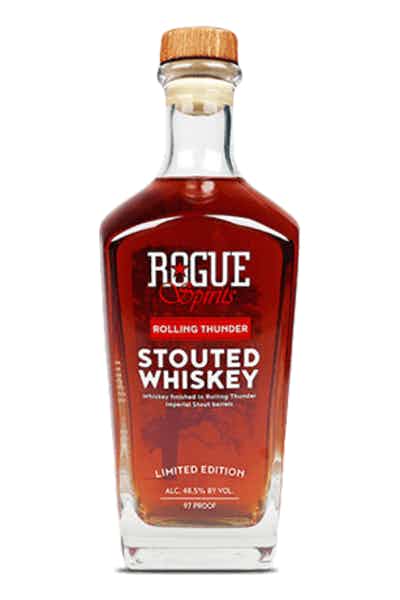 The culmination of all things Rogue, Rolling Thunder Stouted Whiskey is the ultimate culmination of Rogue’s farmer, brewer, cooper, distillery. This limited-edition whiskey is distilled at Rogue's distillery, then aged in barrels built by hand at Rogue's cooperage, Rolling Thunder Barrel Works. These barrels had already aged an Imperial Stout brewed by Rogue's brewery. The final product is a 3-year aged American Single Malt - aged one year in new Oregon Oak barrels and two years in stout saturated Oregon Oak barrels. Rolling Thunder Stouted Whiskey combines the spice and citrus tones of Oregon Oak, the flavor of the original whiskey and the deep, dark tones from the stout. It is big, bold and a true one-of-a-kind whiskey that bridges the gap between Single Malt and Bourbon.

Yes, whiskey is gluten-free, thanks to the distillation process used to make it. The Celiac Disease Foundation concluded that it can safely be considered gluten-free, though it’s still possible that some people with high gluten sensitivity or celiac disease could have a reaction to whiskeys created from certain grains.
Whiskey can include a large number of different distilled spirits made from fermented grain mash — usually cereal grains like rye, barley malt, wheat and corn. The drink undergoes aging in wooden containers, most often oak.
One of the reasons whiskey is so popular is that there’s no single way to enjoy it. There’s the purist route — straight and neat, no mixers, no ice — but what fun is being a purist? You can add water to it, which can enhance certain bottles’ flavors or you can add it with other ingredients to make delicious mixed drinks. It’s the foundation of the Manhattan, the Old Fashioned, the Whiskey Sour and many others.