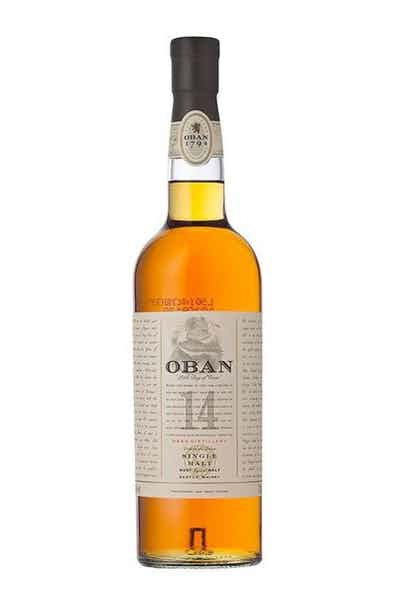 Crafted from one of the oldest and most legendary distilleries in Scotland, Oban 14 Year Single Malt is expertly aged in the traditional fashion. Thanks to founders John and Hugh Stevenson setting up their brewery — and ultimately the Oban Distillery — in the 1790s, the once-sleepy port city of Oban became a bustling seaside resort in the West Highlands. The distillery remained in the family for nearly a century before J. Walter Higgin purchased and renovated it. Now, more than 100 years later, the Oban Distillery remains essentially unchanged since Higgin's refurbishment. You simply won't find a more authentic Scotch whisky than Oban. Oban 14 Year Single Malt is crafted with 100-percent barley to the distillery's exact specifications, which includes fermenting the malted barley in small-batch, lantern-shaped copper stills before aging the scotch in oak casks. During its rest, the whisky is shaped by the surrounding environment, which consists of warm, salty Gulf Stream air and a temperate climate. The result is a full-bodied, extremely dry scotch with notes of honey and dried figs, which lead to a soft, oaky finish. Wondering how you should drink Oban 14 Year Single Malt? Enjoy it neat or on the rocks. The drink has a sweet, rich aroma with hints of citrus, pears, seaweed, ropes and sea salt with a slight peatiness. The long finish culminates with dry oak and fruit. You can also add a drop of water and swirl it around to note its oily characteristics and bring out the smoothness. Buy Oban 14 Year Single Malt online at a great price through Drizly and have it delivered directly to your door or pick it up in store. Winner of Gold at the 2017 San Francisco World Spirits Competition