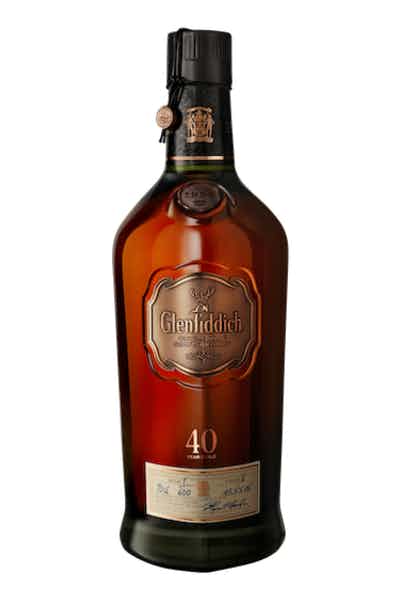 Glenfiddich 40 Year Old Scotch Whisky is an exemplary single malt made from marrying 40 year old vattings to craft a peerless whisky. Infinite depth and layer upon layer of aroma and flavor create a 40 year old unrivalled by other rare whiskies of this age. Best enjoyed neat, on the rocks, with a splash of water, or with club soda to expand the flavor. For over 130 years Glenfiddich has been one of the few single malt distilleries to remain entirely family owned and our whisky has become the world's most awarded single malt Scotch whisky, a true reflection of the passion, integrity and innovative spirit championed by a traditional fermentation process that has been passed down through the generations. Our 40 Year Old is not only precious but also pioneering. Our Malt Master carefully hand selects individual casks before marrying them together with what was left over from the previous 40 Year Old vatting. This continuous process is known as "remnant vatting" and contains whiskies that are at the very least, 40 years old. We are the only single malt Scotch whisky in the industry to use remnant vatting. Glenfiddich was founded by William Grant to fulfil a lifelong ambition of creating the 'best dram in the valley' and named 'Valley of the Deer' in Gaelic. Skillfully crafted. Enjoy responsibly.