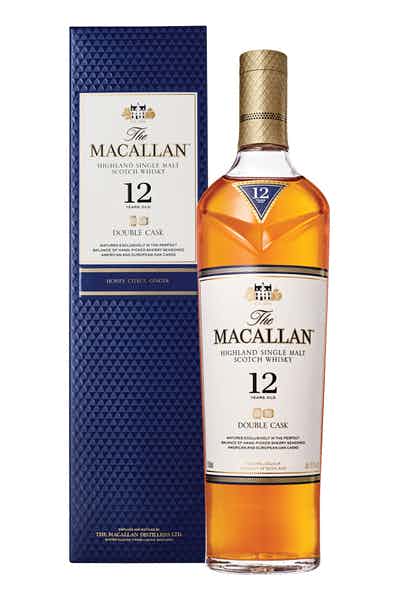 View all products by The MacallanCalifornia Residents: Click here for Proposition 65 WARNING

The Macallan Double Cask 12-Year-Old Single Malt Scotch Whisky not only sounds expensive, it is expensive — a standard 750mL bottle will likely cost you anywhere from $75 to $100. With a sticker price like that, you have to wonder what makes this particular scotch so valuable. Macallan scotch whiskies age in specialty casks made from meticulously sourced, carefully shaped, and expertly seasoned oak barrels (a process that certainly adds to the product’s final cost). That being said, the Macallan 12 Year’s price tag is nothing compared to some of the brand’s most notable bottles, like a 1946 Macallan that sold at auction for nearly half a million dollars.
If you haven’t tried a lot of scotch, Macallan Double Cask 12-Year Old Single Malt Scotch Whisky is actually a good place to start your journey. Macallan uses only natural ingredients (no artificial coloring here), and its taste doesn’t deliver too much of the aggressive peat flavor often associated with scotch. Furthermore, while it can be difficult to objectively categorize scotch as “good,” the Macallan 12 Year is a single malt whisky, a designation that’s generally considered the highest quality a scotch can be. Single malt scotch whiskies must be made at one distillery and are crafted using 100% malted barley.
As its official title suggests, the Macallan Double Cask 12-Year-Old Single Malt Scotch Whisky is a single malt variety of scotch. This category is generally considered the best type of scotch by those in the know. To be described as a single malt whisky, the spirit must be made from 100% malted barley and crafted at one single distillery (Macallan 12 Year happens to be distilled at the impressive Macallan Estate in Easter Elchies, Scotland). Macallan could also be categorized as a Speyside whisky, a style of scotch from the Scottish Highlands that’s less peaty in flavor and more warm and spicy.
If someone in your life appreciates scotch, then you can’t go wrong with a bottle of Macallan Double Cask 12-Year-Old Single Malt Scotch Whisky. Macallan is one of the better-known luxury brands among scotch aficionados. You might also consider gifting a bottle to someone interested in expanding their scotch palette, as Macallan whisky is generally lighter and more accessible than other more aggressive styles of scotch.
Enter a delivery address