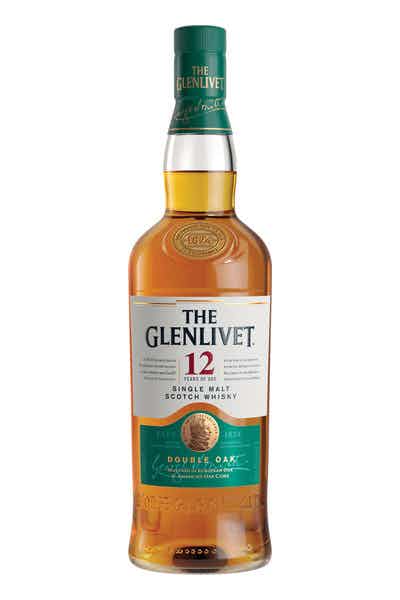 The Glenlivet 12 Year Old has been called a lot of things in its time: smooth, fruity, complex, sophisticated, entertaining, classic. The Original Malt Whisky Almanac calls it: "A first-class malt. One of the most popular malts in the world – deservedly so." Representing The Glenlivet’s signature style, this classic single malt scotch whisky is first matured in traditional European Oak before spending time in American oak casks, giving the whisky its distinctive smoothness while imparting notes of vanilla. On the nose, enjoy fruity and vibrant aromas of summer meadows and tropical fruits, notably pineapple. On the palate is a well-balanced expression with floral notes. Smooth and sweet fruit notes of fresh peaches, pears, vanilla and pineapple pair with marzipan and fresh hazelnuts, resulting in a long, creamy and smooth finish.

View all products by The GlenlivetCalifornia Residents: Click here for Proposition 65 WARNING

The Glenlivet 12-Year-Old Whisky is one of the best-selling single malt scotch whiskies in the United States and is considered exceptionally smooth and approachable. Many scotch expressions can be overwhelmingly peaty and smoky, but Glenlivet presents a different scotch experience entirely. When drinking Glenlivet 12, look for fruity notes like pear, pineapple, and apricot combined with the oak, honey, and vanilla flavors from the long barrel-aging process. As you swallow, expect a mild and pleasant nutty sweetness — the overall finish is woody and long-lasting with very little sharpness from the alcohol.
Traditionally, when enjoying a single malt scotch whisky like Glenlivet 12, you should steer away from mixers or anything that might dilute the whisky’s appealing and complex flavors (after all, after 12 years of aging in specialty oak barrels, it seems sacrilegious to alter the taste in any way). Opt for a tulip-shaped glass (a Glencairn or snifter glass will do) with a wide bulb and a narrow rim. This distinctive shape allows you plenty of room to swirl the scotch around the base while gently sipping from the mouth. Some suggest adding a small amount of water to your Glenlivet 12, a trick that helps release some of the spirit’s flavor.
A standard shot (about 1.5 ounces or 44mL) of Glenlivet 12-Year-Old Whisky contains a little less than 100 calories (about 97 calories to be exact), though the exact amount really depends on the size of your pour. Interestingly, the amount of liquid in a shot glass varies depending on which country you’re in. A single shot in Scotland is typically just 35 mL. Generally speaking, a single malt whisky or other high-end distilled spirit won’t be too heavy-handed in its calories — you’ll want to instead look out for overly sweet mixers or extra large portions.
There are many reasons that a bottle of the Glenlivet 12-Year-Old Whisky makes an excellent gift. It is considered one of the best “intro” scotches, meaning it’s appealing for a range of palettes, even those who don’t particularly enjoy the more traditional scotch expressions (usually because of their strong smoke and peat flavors). Glenlivet 12 is expertly balanced and smooth, and you can feel confident gifting a bottle.
Enter a delivery address