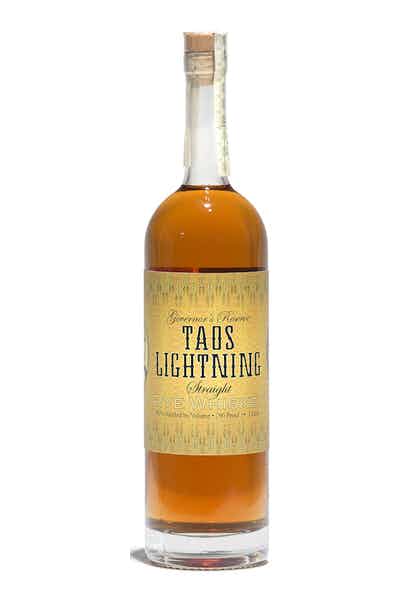 TAOS LIGHTNING, the oldest spirit brand in America, was originally distilled in 1820 by Simeon Turley of Arroyo Hondo, New Mexico. A popular whiskey among fur trappers, traders and Native Americans, it was sold in the Southwest until 1847, when Turley was killed during the Taos Pueblo Revolt. Charles Bent was on brother-in-law of Kit Carson and was appointed the first civilian govenor of the newly formed territory of New Mexico. For his role in the Taos Pueblo Revolt, Govenor Bent was scapped and decapitated by Pueblo Indians. Some 160 years later the name was resurrected by KGB Spirits as our best selling product from Los Luceros Destilaría. The initial offering of two barrels, sold exclusively in Santa Fe and Taos, was embraced by connoisseurs of both whiskey and history. TAOS LIGHTNING is made from 95% rye aged in new charred American Oak. The dry climate and high elevation in New Mexico create a unique aging process. TAOS LIGHTNING has the qualities of a fine Islay scotch; it is subtle and refined with a long, smooth finish. Each barrel is hand selected and filtered. Each bottle is hand bottled, numbered and dated.