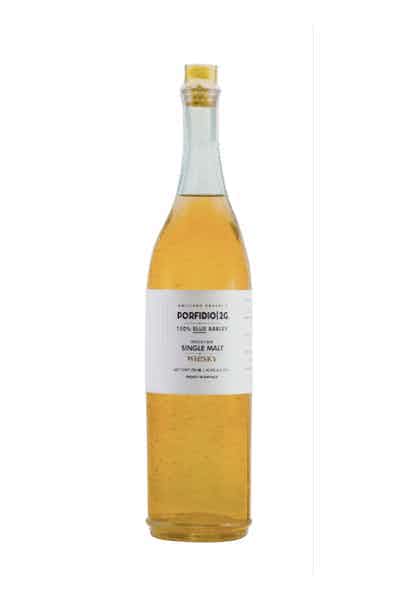 PORFIDIO|2G: THE WHISKY THE STORY OF ITS AUSTRALIAN CREATION One night, while Porfidio was busy making Fair Dinkum®, the Auscal, we happened to run into one of the locals, a barley farmer, in the local pub, and he shared with us his sorrows regarding the Australian barley trade. We learned that, broadly speaking, barley comes in two types: blue or white aleurone. Blue barley varieties have a blue aleurone layer below the husk which gives the barley a blue tinge and sweeter taste. In many parts of the word, such as France, blue barley is considered better, because of its higher anti-oxidant properties. But in China, Australia's biggest barley export market, consumers go by looks instead of taste, and they don’t like the blue color. And so, to satisfy their Chinese paymasters, Australian barley growers have been collectively uprooting blue aleurone barley from their fields to avoid contamination risks for white aleurone barley. Philosophically, since we oppose racism based on subjectively perceived superior looks, naturally we consider assertions of the superiority of white barley over blue as "botanical racism”. We can’t concede a prejudice against the color blue as an argument for restricting bio-diversity. In fact, contrary to Chinese consumer perception, we thought that "Blue” Agave, and "blue" corn, not to mention "blue" potatoes, actually have a positive, trendy look. We decided to support our mate from the pub - rather selfishly of course, because we love the natural taste of blue barley - but also prompted by the ethics of botanical diversity against monoculture. And so, we transformed, and continue to transform every year, the fruits of his harvest into a delectable spirituous delight, probably one of the finest Australian whiskies. OTHER FACTS Whisk(e)y today is made from a range of raw material sources, ranging primarily from barley to wheat to rye to spelt to corn (maize), but also other grains. All original Scotch Whisky, however, at least up the 18th century, was made exclusively from barley. And so, we thought that it would be a dainty idea to do the "original, old-fashioned thing" by creating a whisky made from 100% barley a la ecossaise, thus literally creating a single variety whisky. Whisky yeasts, on their part, come in two types: those that neutralize the taste on purpose, the dry style, and those which tease out the fruity notes from the grain. As a question of opinionated preference, we chose the second, because we loved the taste, a wonderfully flavorful, fruity whisky faithful to its raw material and terroir, raised to its full potential by delicate notes of the finest Quercus Alba oak through its ageing in the highest quality Australian-made virgin 110 liter oak casks. And so Porfidio|G2 was born - quite coincidentally we may add - as a single-variety, single-malt, single-cask, single-estate whisky made from 100% Blue Barley, single-handedly created by Porfidio's upcoming second generation, Emiliano Grassl.