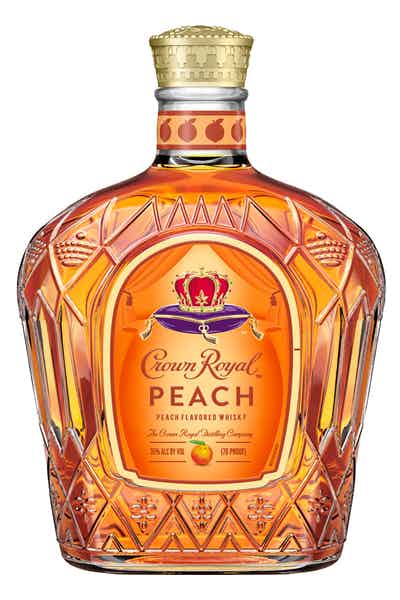 Unwind in luxury with a glass of Crown Royal Peach Flavored Whisky. To create this extraordinary blend, fresh Georgia peaches are harvested, de-stoned, pressed and strained to preserve their bright, aromatic taste. Then, our master blender infuses the juicy flavor for a vibrant and delicious whisky with luscious notes of creamy vanilla and a decadently sweet finish. Made with the signature smoothness of traditional Crown Royal, our peach flavored whisky will enhance a cozy cocktail party or rooftop celebration. Enjoy our whisky mixed with iced tea for a refreshing tasting cocktail. Includes one 70 proof 1 L bottle of Crown Royal Peach Flavored Whisky. Please drink responsibly.Nose: Fuzzy peach skins with light notes of warm spice and oak. Taste: Ripe juicy Georgia peaches, touch of creamy vanilla and rich Canadian Whisky. Finish: Sweet and smooth.

If you can find it — originally released in the spring of 2019, Crown Royal Peach Flavored Whisky was meant to be a limited edition blend of Crown Royal whiskies and Georgia peach flavor. However, people could not get enough of the super affordable, 70-proof Canadian whisky, and liquor stores were forced to limit how many bottles shoppers could buy at one time (literally — people were changing outfits and re-entering the store to try and score an extra bottle). The hype has somewhat died down so you can occasionally track down a bottle of this peach-flavored treat online, but most folks wait until springtime each year for the latest release (psst…you can always rely on Drizly to see which liquor stores in your area have Crown Royal Peach in stock).
Crown Royal Peach Flavored Whisky was initially a limited edition release for the spring and summer of 2019; due to the product’s surprising popularity, the company continues to release its peach expression annually (just in time for warm weather). Because of the product’s inconsistent availability, you might want to stock up on a few bottles just in case. After all, unopened whiskey is pretty much good forever. If you are planning to store your whiskies for a longer period of time, be sure you house the bottles in a cool, dark place and keep them standing up.
If you’re seeking a fun gift idea for a whiskey lover, you can’t go wrong with a bottle of Crown Royal Peach Flavored Whisky. Affordable and tasty, this flavored Canadian whisky has accumulated a super dedicated following; fans have even crafted Crown Royal Peach tumblers and Christmas sweaters (in case you were looking for an additional gift). This is a liquor that encourages drinkers to get creative — for a truly memorable celebratory cocktail, combine Crown Royal Peach with some orange juice and champagne for a Royal Peach Fizz.
Enter a delivery address