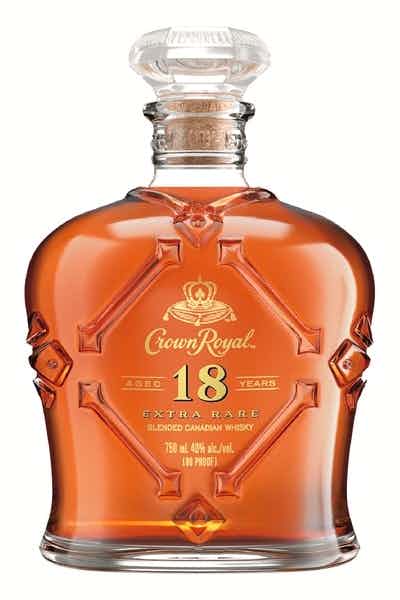 Taste a new pinnacle of luxury: Crown Royal Aged 18 Years Extra Rare Blended Canadian Whisky. Crown Royal Aged 18 Years is a rare blend of three of our most exceptional whiskies, handcrafted by our master blender, patiently aged to perfection for no less than 18 years. The result is layers of intensity that are both surprising and delightful. Enticing notes of vanilla and stone fruit greet you on the nose, followed by the velvety body of light oak tempered by caramel spice. Delicate notes of nougat linger in the full-bodied finish. This elegant, amber whisky is truly the jewel of our rare stock. Simply pour neat in a whisky tumbler with iced water on the side for a perfect serve. Includes one 80 proof 750 mL bottle of Crown Royal Aged 18 Years Extra Rare Blended Canadian Whisky. Please drink responsibly.Nose: Vanilla and stone fruit Taste: Velvety, light oak tempered by caramel spice Finish: Lingering nougat, full-bodied

Crown Royal Aged 18 Years Extra Rare Blended Canadian Whisky is exactly what its name promises: a blend of three of the very rarest of Crown Royal’s whiskies, aged for 18 years in Canada. This whisky comes straight from Crown Royal’s Master Blender and carries notes of vanilla, light oak, caramel, stone fruit, nougat, and spice — all from one of the last batches of whiskies made in Montreal’s LaSalle distillery. This supremely fine whisky is aided by the unique quality of the water around the distillery, which grants the final drink a full-bodied smoothness.
Crown Royal’s Whisky is gluten-free, even though it’s made from grains. In fact, pure, distilled whisky from barley, rye, and wheat is always gluten-free because the distillation process destroys and removes any gluten in the liquid. As a result, Crown Royal and other high-quality whiskies are safe for people with celiac disease or who have sensitivity to gluten. Other whiskies may contain gluten, but that’s because they often contain additives introduced after the distillation process — Crown Royal is emphatically not one of them.
Crown Royal is distilled in the unique town of Gimli, Manitoba, where 1.5 million barrels of whisky lie in waiting to grace the world with magnificent flavors. The distillery sits on the western shore of Lake Winnipeg, one of the largest freshwater lakes in the world, with 51 warehouses, a stillhouse that also helps guide fishermen into the harbor, and 360 scenic areas. Making Crown Royal Whisky is a 24/7 operation that employs over 75 people who distill, mature, and blend whiskies together as they have since 1939.
Crown Royal is an extremely thoughtful gift for the well-seasoned whisky connoisseur. Its 18-year aging process imparts it with many subtle and strong notes that include spice, vanilla, and others that weave around each other’s palate. As a top-shelf whisky, Crown Royal is made for sipping but also serves as the ideal base for cocktails. If you’re concerned about quality, fear not: You’re choosing one of the continent’s finest whiskies.
Enter a delivery address