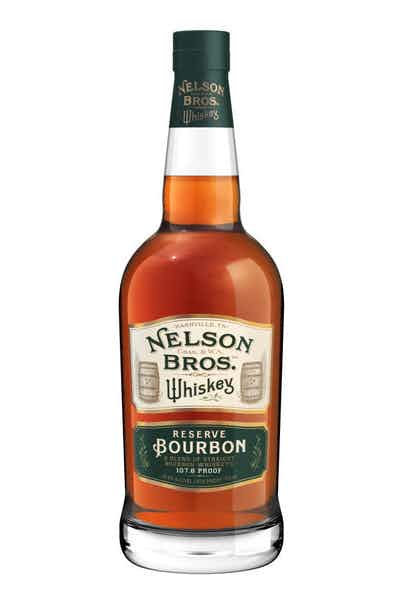 Nelson Brothers Reserve Bourbon is a premium blend of high-rye, straight bourbon whiskeys, made from the choicest lots of barrel aged bourbon in the Nelson's Green Brier Distillery inventory. To craft the perfect bottle of bourbon, founders Andy and Charlie Nelson identify specific superior bourbon casks, then combine them into distinct batches that yield a richer, more robust, high-proof bourbon blend, enhancing the character, flavor, and feel of this reserve bourbon whiskey. Rich with rye and offering dark cherry, caramel, and spice notes, this uniquely bold, balanced, full-flavored, high-rye reserve bourbon is greater than the sum of its parts. Sip and savor this 107.8 proof bourbon neat, on the rocks, or with a splash of water, or use it to enliven your favorite bourbon cocktails. Proudly made in the state of Tennessee, Nelson Brothers Reserve is a superior whiskey bourbon certain to startle and delight; one sip, and you’ll know it’s Nelson Brothers. Please enjoy responsibly. Nelson Bros.™️ Straight Bourbon Whiskey 53.9% alc/vol © 2022 Nelson’s Green Brier Distillery, Nashville, TN