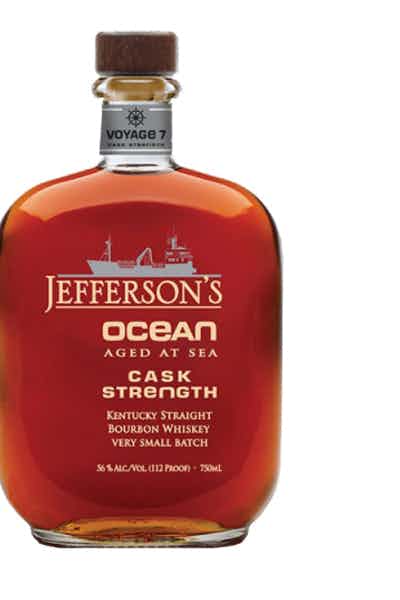 Jefferson’s Ocean Aged At Sea Cask Strength Bourbon Voyage 10 is the second release of Jefferson's Ocean bottled at cask strength after Voyage 7. It is first matured in older bourbon casks for approximately six to eight years on land, before the casks are placed on a ship and allowed to rest for another several months at sea. At sea, the bourbon and oak casks are forced to mingle with each other as the ship — which stops in five different continents and crosses the equator four times during the journey — rolls back and forth over the water. In addition, the temperature and barometric pressure fluctuations during the sea voyage cause the oak staves to expand and contract, and allow the bourbon to extract more of the tannins and flavor from the oak during its maturation. Bottled at cask strength for the second time, Jefferson’s Ocean Aged At Sea Cask Strength Bourbon has an aroma of cinnamon buns, orange zest, burnt sugar and marshmallow. Thick notes of salted caramel, figs and chocolate fudge dominate the palate, and lead to a playful finish accented by sweet mint, lemon cake and nutmeg.