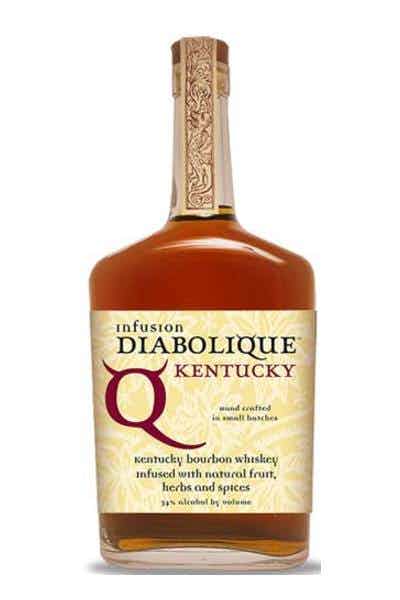 Infusion Diabolique Kentucky Fruit and Spice Flavored Bourbon: Infusion Diabolique is a line of flavored spirits. First launched in 2005, they use a true maceration process, meaning they immerse the natural flavoring ingredients in the base spirit and let it steep, not unlike a tea bag in hot water. Infusion Diabolique Kentucky uses a 4yr old Kentucky bourbon as its base and then infused with "Black Mission figs," vanilla, cinnamon, and a blend of unnamed herbs and spices. They use no added sugar and any sweetness is attributed to the fruit used in the infusion (presumably the figs). According to the write-up at the Massachusetts' Beverage Business, the flavor was inspired by executive chef Robert Fathman of the Lenox Hotel in Boston who served extra figs with a pour of bourbon and spices. He continued experimenting until he met soon-to-be partner Brandon Bach to market the spirits.Together, they operate under the name of Black Squirrel Enterprises. They contract with MS Walker to acquire the base spirit and bottle the product. We have opted to list this as a flavored whiskey rather than a liqueur due to the lack of added sugar, despite the somewhat milder proof.