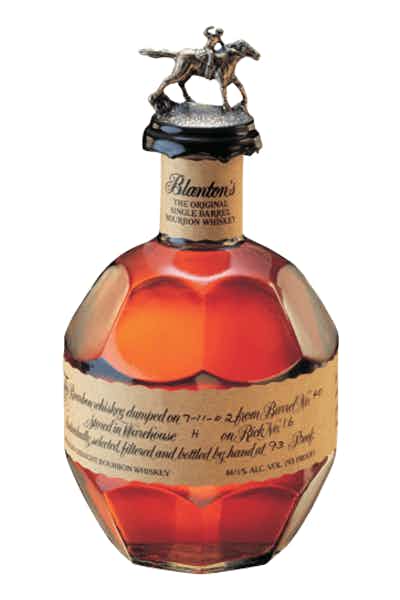 Single Barrel Bourbon started with Blanton's in 1984. Nearing retirement, Master Distiller Elmer T. Lee was tasked with creating a bourbon of exceptionally high quality. With careful reflection, he recalled the earlier days of his career in the late 1940s when he worked under Colonel Albert B. Blanton. Colonel Blanton was the president of the distillery until 1952. Mr. Lee remembered that when Colonel Blanton would entertain dignitaries and other important guests he would handpick "honey barrels" from the center cut of Warehouse H and have that bourbon bottled one barrel at a time. As a tribute to Colonel Blanton's old tradition, Elmer T. Lee decided to name this new bourbon "Blanton's Single Barrel".

Blanton’s Single Barrel Bourbon is so expensive because, as its name implies, it comes from a single batch of bourbon. This is the ultimate example of the “quality over quantity” axiom: a bourbon that only comes out once a year or so and has such a high demand that its supply will never come close to matching it. The result, as Econ 101 would promise, is that each bottle of Blanton’s comes with a high price tag — an MSRP of around $65, but they tend to sell for around $160.
The best place to find Blanton’s is on Drizly because Drizly sources from all regional liquor stores and compiles their products in one virtual “shop.” Blanton’s is notoriously difficult to find, however, since they make single-barrel bourbon that comes from only one barrel and has a particularly unique flavor as a result. Because they rarely release new batches, the bottles tend to get snatched up quickly.
Blanton’s Single Barrel is released once a year from single-batch barrels, with each batch having its own unique flavor that exists once and never again. Blanton’s also releases other editions such as Straight From the Barrel (an unfiltered, uncut bottle) and Gold, each of which is also only released once per year. Because bourbons are usually produced by taking different barrels of whiskey and blending them together, Blanton’s single-barrel bourbons are exceedingly rare.
If you can get your hands on a bottle of Blanton’s, it is a fantastic gift for any occasion, as it stands out from the rest: Rather than blending different whiskeys as with usual bourbon, Blanton’s takes their single-barrel bourbon from one hardwood barrel. Whatever magic the batch has that year is the magic you get in the end, for better or worse — though it’s pretty much always for better.
Enter a delivery address