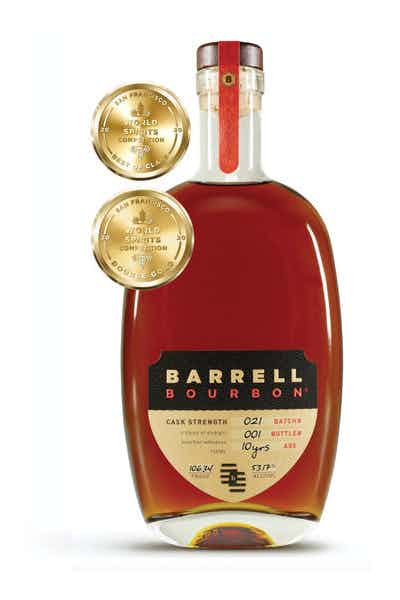 Barrell Bourbon Batch 021 is the culmination of two separate projects used to contrast one another. The first is a blend of 10-year-old barrels from TN, IN, and KY. We sorted these barrels into 3 groups by their most defining characteristics: one group of the most corn-forward and buttery barrels, one group of the woodiest barrels, and one group of easy-drinking lower proof barrels. The result was three different ingredients, each designed to bring a particular aspect to the final product. The balancing of these three ingredients proved difficult as the woodier ingredient so easily dominated the other two, but also brought a viscosity and mouth feel that we found very intriguing. Ultimately, we chose to integrate 18 carefully chosen 14-year-old barrels into the final blend. This allowed us to keep the dry, woody, and palate coating characteristics we loved so much in the 10-year-old blend by accenting them with a fruitier, gentler 14-year-old component. The result, Barrell Bourbon Batch 021 is a wonderfully autumnal bourbon, built on a dry toasty backbone with hints of butter and fruit layered in for complexity and contrast. Appearance: Oiled Leather. Nose: Opens with a tangy blackberry note supported by a dry oaky character. Blonde tobacco, sunflower seeds, iced tea, and cardamom are gradually joined by a growing peppermint note. Sweeter pastry notes such as cider donut, apricot danish and Turkish delights can be found. While not as floral as some batches, the nose is lifted by Creme Yvette, milkweed, pollen and peach skin. Slate and ginger ale offer a refreshing counterbalance. Palate: Rich and nutty, cocoa butter supports ample macadamia nut, nougat, and tonka bean. Orange blossom honey and apricot are joined by more exotic notes of rose, loganberry and sumac. Finish: The blackberry note from the nose returns alongside elderberry, and quince paste that evolve into lingering spicy notes of cocoa nib, aniseed and raspberry leaf.