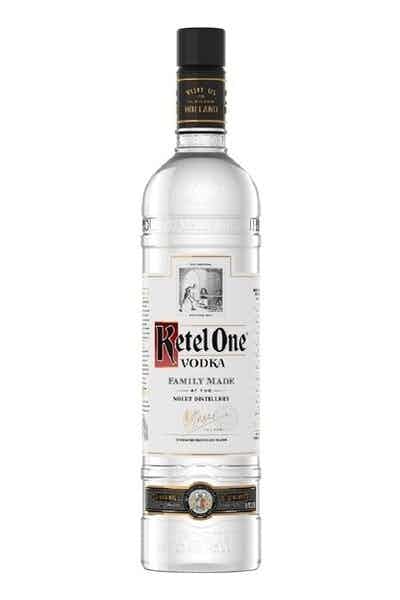 Experience the taste inspired by traditional distilling expertise with Ketel One Family Made Vodka. Our 80 proof vodka is carefully crafted using exclusively 100% non-GMO European wheat for smoothness and neutrality. Distilled in copper pot stills, filtered over loose charcoal and stored in lined tanks, our vodka offers a crisp, unique flavor and strong finish. Perfect on its own or added with your favorite cocktail, simply mix with club soda, a cucumber ribbon and garnish with a sprig of mint for a refreshing tasting Soda with Cucumber Mint cocktail. Ketel One Family Made Vodka was recognized as the top-trending vodka at the 2020 Drinks International awards. Includes one 80 proof 1 L bottle of Ketel One Family Made Vodka. Please drink responsibly.Nose: Crisp, lively tingle | Taste: Signature silky softness coat your tongue | Finish: Long, with subtle flavors

No—Ketel One is not a potato vodka. Instead, it’s made from another popular vodka base: 100% winter wheat. That wheat is non-GMO and European, which gives it a particularly smooth feel and helps create a completely neutral taste. The wheat is combined with water, and the mixture is fermented and then distilled through a column distillation process. From there, a portion of the mixture goes into copper pot stills for additional distillation—and the original 19th-century copper pot is still part of this process (talk about centuries of knowledge!). The original fermented mixture and the newly distilled mixture are combined to make the Ketel One Vodka you know and love.
Yes—the makers of Ketel One pride themselves on the 10 generations of passed-down family knowledge that goes into making every batch of this smooth vodka. Also, each batch is taste-tested and approved by a Nolet family member (the family who created the vodka generations ago). Ketel One makers combine modern knowledge and modern distilling techniques with the brand’s traditional distilling methods to make a vodka that is self-defined by four Fs; fragrance (honey and citrus), flavor (crisp), feel (silkiness), and a lasting finish. And while the vodka is made in large batches and distributed throughout the world, an element of small-batch dedication, precision and craftsmanship is brought to every bottle to ensure the vodka lives up to its well-deserved hype.
Ketel One is a wheat vodka that is made from European, non-GMO winter wheat — the wheat’s pureness is the reason behind the vodka’s smooth mouth-feel. The vodka has an alcohol by volume measure of 40 percent, which is also known as 80 proof: this puts it in line with most of the other vodkas on the market (vodka has a standard proof of 80). The traditional Ketel One Vodka is unflavored and odorless—making it a completely classic vodka that is great over ice (because of its smoothness) or mixed into a tasty cocktail (also because of its crisp, smooth taste).
Ketel One Vodka is an award-winning liquor that has been named the best-selling vodka by Drink International’s 50 Best Bars Brand Report and is regularly the selected pour for vodka enthusiasts. Receiving a bottle of Ketel One is special—it’s a liquor that feels like a special occasion and tastes like one. Also, it's probably a bottle that most people don’t purchase for themselves, which makes it ideal for a gift. On top of that, it’s great as a mixer for brunch beverages like Bloody Marys or after-work cocktails like vodka soda, and it's just as great on its own.

At the heart of the super-premium vodka, Ketel One, lies one family's passionate pursuit of excellence in distilling the world's finest spirits, passed down from father to son for 11 generations. Carl Nolet Sr. – 10th Generation Master Distiller and creator of Ketel One – and his sons Carl Nolet Jr. and Bob Nolet are committed to keeping Ketel One perfect because their family legacy depends on it. Inspired by more than 325 years of family distilling expertise, Ketel One® Vodka is the perfect marriage of old-world pot still and modern column distilling techniques. The 19th century Pot Still #1 – after which Ketel One is named – is still used today to produce every batch of Ketel One. Ketel One is the bartender's favorite vodka, claiming the title of “Best Selling Vodka" and “Top Trending Vodka" for three years in a row by the Top 50 bars in the world.