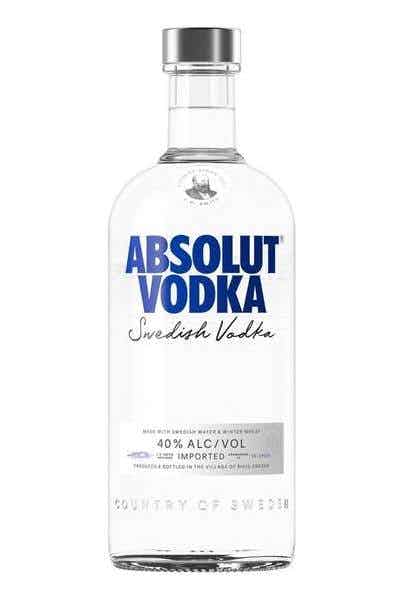 Absolut Vodka is one of the most famous vodkas in the world. It's made from winter wheat grown in the fields of Åhus, Sweden. Absolut is rich, full bodied and blends beautifully with other aromas, enhancing the taste of your drinks and cocktails. It has been produced at the famous old distilleries near Ahus in accordance with more than 400 years of Swedish tradition. In 1879, Lars Olsson Smith, its founder, introduced the continuous distillation with which he made Absolut. Instead of the usual three or four times, the vodka was distilled an infinite number of times. This vodka has completely redefined the premium vodka landscape, becoming synonymous with art, culture and nightlife. By starting a revolution in cocktail creation and launching a range of flavors never before seen on the market, Absolut has become an icon in its own right.

Absolut Vodka is famously a Swedish product, and the company’s chic advertising, minimalist logo, and sustainability commitments are very on-brand for the Swedes. The actual Absolut distillery is located in a quiet vacation town called Åhus, situated on the country’s southeastern shores along the Baltic Sea. While Absolut Vodka didn’t actually reach the United States until the late 1970s, the team at the Åhus distillery has crafted the spirit for well over 100 years. The company proudly sources everything for the vodka from within a 50-mile radius of the distillery and values quality over quantity.
The question as to whether Absolut Vodka is a gluten-free product has led to much controversy; after all, the main ingredient in Absolut is a hardy, gluten-y Winter wheat. However, according to the U.S. Food and Drug Administration, distilled spirits are considered gluten-free because the gluten proteins are removed during the distillation process — ergo, Absolut Vodka is considered safe for those with gluten sensitivity or Celiac Disease. Absolut has even gone so far as to extend that same claim to their lengthy flavored vodka line (which features more than 20 flavors including spicy pepper and berry acai).
Absolut Vodka is made almost entirely from water and Winter wheat, but the team behind the brand is obsessed with local sourcing. The water used in Absolut Vodka comes from super-deep Swedish wells, and the special Winter wheat grain comes from more than 300 small, Swedish farms. Chemicals and waste are kept to a minimum, recycling is prioritized, and the company hopes to be Carbon neutral by 2030 (the Swedish distillation facility is already far more energy-efficient than a typical distillery). Absolut is a clean, balanced spirit, and you can taste the care and commitment in the final product.
Absolut Vodka is one of the best-known vodka brands around the world. People appreciate Absolut Vodka for its well-balanced flavor with a gentle touch of sweetness. When you buy a bottle of Absolut Vodka, you can feel especially good about your purchase because the brand is committed to sustainability efforts, supporting artists, and advocating for equal love. Moreover, a 750mL bottle of Absolut Vodka should only cost you around $20, leaving plenty of room in your budget for some soda water and limes.