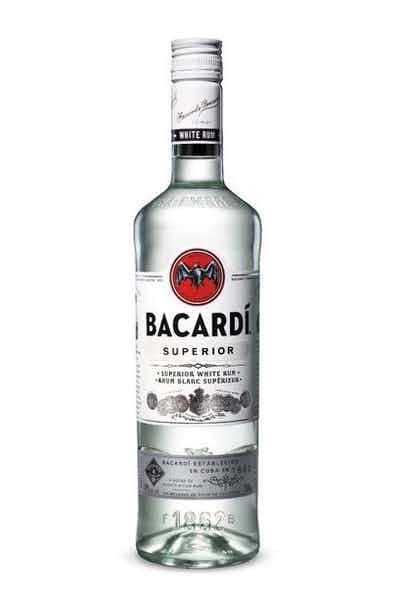 BACARDÍ Superior Rum was first created by Don Facundo Bacardí Masso in 1862 and has since been recognized as the world's most-awarded rum. It is a light tasting and aromatic rum with subtle vanilla, citrus and floral notes BACARDÍ Superior Rum is a light and aromatically balanced rum. Subtle notes of almonds and lime are complemented by hints of vanilla. The finish is dry, crisp, and clean.

Bacardi Superior Rum is, as its name suggests, a fine product. While it is not the world’s fanciest rum, it’s a fantastic and budget-friendly light rum that’s pleasing to amateurs and connoisseurs alike. Even if you’re mixing assembly line mojitos and going through rum by the bottle, Bacardi won’t severely dent your wallet — it’s a delicious choice for rum cocktails such as the Daiquiri, Cuba Libre, and others. Though you might want something fancier if you’re a pro, Bacardi rarely disappoints.
Bacardi Superior is the same thing as Bacardi Silver — both are the original Bacardi rum treated to a solid one or two years of aging in oak barrels, then filtered once more to turn it into white rum. The barrels used to age these rums are carefully selected, as they are responsible for lending the rum much of its flavor and characteristics. Bacardi Silver and Bacardi Superior have no color and offer a light flavor profile.
Bacardi Superior is a white rum produced by aging original Bacardi for one to two years in carefully selected oak barrels, then refiltering it so it can be classified as white rum. In the United States, Bacardi Superior is 40% alcohol by volume (ABV), or 80 proof, whereas in Europe and the U.K. it is bottled at 37.5% ABV, or 75 proof. Because of its light flavor, Bacardi Superior is the perfect choice for a multitude of cocktails, including the Daiquiri, Cuba Libre, Piña Colada, Mojito, and — lest you could possibly forget — the Bacardi cocktail.
Part of what makes Bacardi Superior Rum such a good gift is its fabled place in rum history: This was rumored to be Ernest Hemingway’s favorite alcoholic libation, after all, and that’s really saying something. Bacardi was founded over a century ago in Cuba and has become a name that’s synonymous with Caribbean rum. A bottle of Bacardi Superior is a great gift for friends and family, and it’s a great gift to bring to barbecues, parties, and other gatherings.

Rum, lime and sugar go back a long way in the Caribbean. The classic Daiquiri brings them together in a perfect blend of BACARDÍ Superior rum, the tanginess of fruit and the sweetness of sugar. Serve it ice cold for a bracingly refreshing drink.

The BACARDÍ heritage is a proud one. We gave the world the original Cuban Piña Colada - a mellow rum cocktail best made with fresh coconut water and pineapple just as it was back in 1922.

Sweet notes of pineapple are balanced by the refreshing flavor of fresh coconut for the perfect summer cocktail.