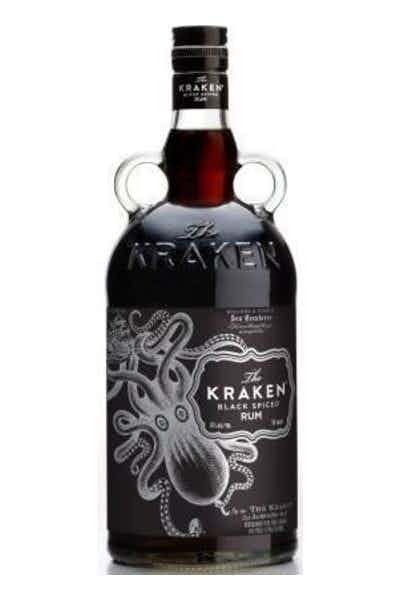 The Kraken® Dark Label is 70 proof. It displays the smoother side of the beast with spices from the deep. The rum is darker, more mysterious, smoother and rich in vanilla. The Kraken®, blended with secret spices, can add a unique kick to any cocktail. Perfect to spice up classics and new favorite cocktails or as a shot. (ABV 35% - 70 proof). The Kraken® is named after legendary sea monster rumored to have attacked a ship carrying spiced rum in Caribbean waters.

View all products by The KrakenCalifornia Residents: Click here for Proposition 65 WARNING

Spiced rum is a great addition to many cocktails, but goes great with things that you want to add a little, well, spice to. Try spice rum with cold brew, Coca-Cola and ginger beer. Rum and coke is one of the most iconic bar orders - and doing it with spiced rum does not disappoint. If you're a person who prefers ginger ale over coke, or maybe even a fruiter juice option, spiced rum works with these too. It's a pretty diverse mixer that gives a lot of mixers a little warmth. Thinking of a fall or winter cocktail that you're hoping to give a little something to? Chances are spiced rum will do the trick.
Spiced rum is literally rum flavored with a number of spices. Usually spiced with cinnamon and allspice, spiced rums typically resemble gold rums. Spiced rum is often aged for the same amount of time as dark rum, but the spices added in give spiced rum that signature taste. A notable brand of spiced rum is Captain Morgan.
Take the ingredients you'd like to spice your rum with and literally infuse your rum. Put each ingredient, including the rum, into an airtight container and keep it sealed. Leave it for two days and then check in to see how the flavor has developed. From there, decide if you'd like to continue infusing, or if you're happy with the flavor!
Captain Morgan Spiced Rum has 0.4 grams of carbs per 1.5oz
Abso-heckin-lutely. Spiced eggnog is delicious and we've got plenty of recipes for you. Think of spiced rum as a fall and winter cocktail companion. Anything you feel could use a little flavor of spice and warmth will probably work with spiced rum.

The Kraken® Black Spiced Rum Dark Label is not for the faint of heart. This unique spirit that hails from Trinidad and Tobago contains a blend of caramel and 13 spices to evoke the atmospheres of the Caribbean. The Kraken liquor owes its name to the homonymous sea monster that, according to Caribbean legend, attacked a ship carrying a sizable volume of spiced rum. The black color of this 70-proof rum symbolizes the ink that the Kraken used to cover its prey. Its Victorian-style bottle features two handles for portability and resembles the shape of the legendary giant squid.

Find this and other drinks at a liquor stores on Drizly near you, or see Drizly is already in your city.