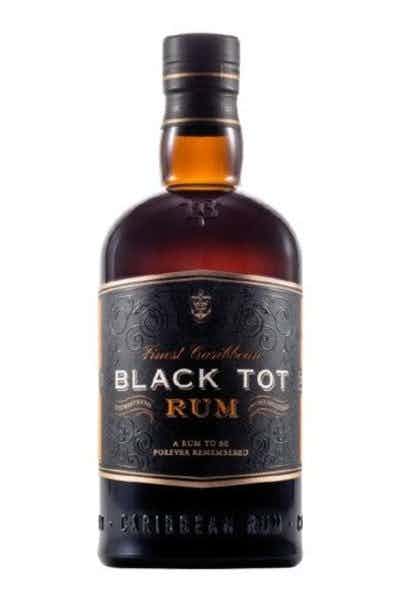 Black Tot Finest Caribbean has been inspired by the story of navy rum and its pioneers of blending. Our Head Blender, Oliver Chilton, has developed a recipe featuring some of the world’s finest rums while creating a new and individual style. With nothing added or taken away, our final blend has been selected for its ability to allow the individual flavours of each rum to shine.

Rum is a liquor distilled from sugarcane product - usually mollasses or sugarcane juice. There's many different types of rums, with the most popular being aged, dark, flavored, gold, spiced and white. Some of these varietals go by different names (white rum can also be called light rum). You'll find each of these has different flavors that will pair uniquely in an array of cocktails. Rum will change in color and flavor based on aging. The longer rum is aged, the darker it will be. Rum is drank both straight and in cocktails - so drink how you best see fit!
Rum mixes a number of drinks like fruit juices, tonic water and sodas. Rum is a notable for an array of drinks from tiki cocktails to rum and coke. Take a look at our rum drink recipes to see if there's anything that catches your eye. Maybe even try a few to pick a favorite. Notable rum drinks are piña coladas, mojitos and daiquiris.
Rum is sometimes - but not always. Pure, distilled rum is gluten-free. However - not all flavored rums are. Be on the lookout for the addition of gluten when rum has additional flavorings or spices.
Rum is a distilled liquor made from sugarcane products - often made from either molasses or sugarcane juice. While it's made from either, most rum is actually made from the former (molasses,) which is basically the residue left behind after sugar has been crystalized from sugarcane juice. Since sugar is so important to the process, rum is produced in sugar producing areas such as the Caribbean, and North and South American countries.
If you want to get into the nitty gritty, we have an article that's perfect for you. But here's a quick overview: juice is squeezed from sugarcane (usually molasses). Water and yeast is added to kick off fermentation. It's then distilled, aged, blended and bottled. This process will be unique to each varital and distiller. Most rums are made in sugar producing countries, like the Caribbean and North and South America.