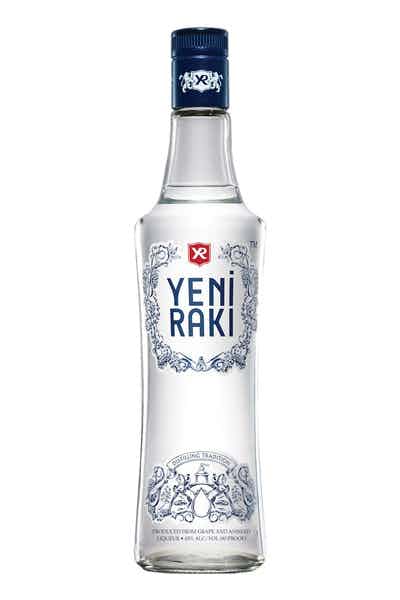 Rakı as a drink has been in the Turkish consciousness for over 500 years. Distilled using grapes, raisins and aniseed, Rakı was first referenced in literature in 1510. It was then widely distilled throughout the Ottoman Empire and in 1937 it became known as Yeni Rakı meaning “New Rakı” to symbolize the coming of the new post-war era. The rich heritage of Yeni Rakı matches its rich flavour. With its tones of aniseed and distilled grapes, it is layered and dramatic. This flavour is created through a highly crafted distillation process. It is a skilled and timely process with the flavour and texture developing with each drop. Grapes are removed from their stems and pressed to create suma. The suma is then twice distilled and mixed with aniseed on the second distillation process in traditional copper stills. The finished Yeni Rakı is then aged oak barrels for a minimum of 30 days to mellow and develop its final distinctive taste. When drinking Yeni Rakı water is added and creates an almost mythical transformation. From a clear liquid, the Yeni Rakı turns a milky colour and texture which over time has attracted the name Lion’s Milk.

The main thing that distinguishes the flavour of Turkish rakı from similar anise-based drinks is the high quality of the anise seeds, with their high essential oil content, and the variety of aromas from the high-quality grapes used in its production. Rakı can be drunk mixed with water. It is chilled in its own bottle and drunk cold.

A standard ratio is half rakı and half water, but you are free to modify these proportions depending on the preferences of your guests. You should stop adding water when the rakı becomes milky white. The most important thing when serving rakı is to pour the rakı first, followed by the water, and lastly the ice, if preferred.

One should drink rakı very slowly, enjoying every drop. The meze accompanying the rakı ritual can be described as delicious hors-d'oeuvres in small portions. Snacks or bite-size delicacies from cuisines from around the world may be prepared to go with rakı. But the most important 'meze' for rakı is good conversation; it is as important as the harmony between the rakı and food.

How To Drink Yeni Raki