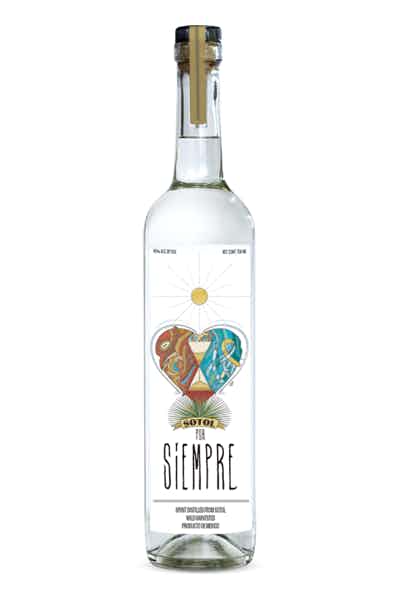 Sotol is a spirit made in northern Mexico, from a variety of plants in the Dasylirion family, native to the Sonoran and Chihuahuan deserts, as well as the American southwest. Sotol Por Siempre is produced from the Dasylirion Wheeleri variety. Much like mezcal production, the sotol plants are harvested by hand and cooked in an earthen pit to release their sugars, then fermented in open air vats with local water. The final sotol distillate runs off the tiny copper pot stills and is adjusted to 45% abv. The unaged Sotol Por Siempre captures the complex essence of the sotol plant. It starts with an aroma that's big and floral with touches of pine and juniper, followed by a small shovelful of earth and mineral on the palate and a bright, minty finish. Try substituting for tequila in your favorite Margarita recipe or swap it out for an herbal alternative to gin in a vermouth-heavy Martini. Por Siempre means forever in Spanish. Our name - Sotol Por Siempre - speaks to forever in its duality; forever in the sense of the future, of the generation of sotol distillers to come, and also of the past and the way that things have always been. We are honored to work with a 6th generation, family-owned producer who, by honoring the traditions of the past, ensures the future of Sotol forever.