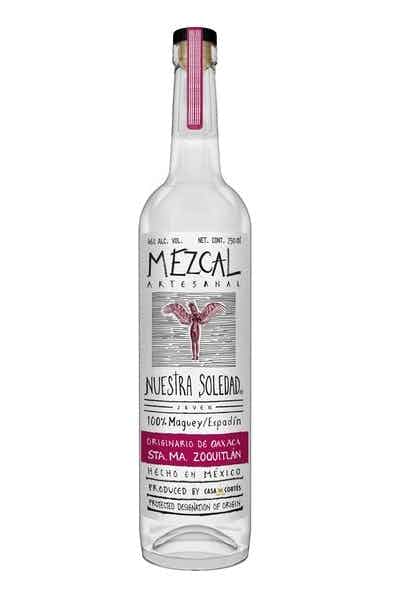 This edition of Nuestra Soledad was made by mezcalero Ignacio Parada (aka Don Chucho) in the village of Santa Maria Zoquitlán. He is recognized in mezcal circles as a top distiller in the region and is one of only a handful of mezcaleros in his village. Notably, he was the first mezcalero to join the Casa Cortés collective of producers when the Cortés family of mezcaleros first began building relationships with other top mezcal distillers throughout the Central Valleys region of Oaxaca around 2010. He distills several varieties of mezcal for the El Jolgorio range, in addition to the Espadín bottling for the Nuestra Soledad village-specific range. Today, Don Chucho works alongside his son, José Parada Valera, who is becoming a seasoned mezcalero in his own right. This is one of many bright stories of young men rejoining their family business after the market for mezcal began thriving around 2013. Don Chucho's success with Casa Cortés has resulted in improvements to his palenque, including improved infrastructure (drainage, roof, bathrooms) and the completion of a second small distillery that is detached from his home, about 50 yards up the road. Santa Maria Zoquitlán is a small village located about 1.5 hours (driving) south of Santiago Matatlán, the epicenter of mezcal production in Oaxaca. The village is situated high in the mountains above a river valley and flood plain that, in the rainy season, is laden with lush greenery. In addition to agave cultivation and mezcal production, locals cultivate squash, corn, beans, and melons. Leather mezcalero shoes are also a known specialty of the village. Above the community of small homes, at even higher elevations, the landscape quickly turns rugged and harsh, with sharp drainage and intense competition among plants for nutrients and water. This is the perfect condition for the long growth cycle of agave. ABOUT NUESTRA SOLEDAD From the same producers as El Jolgorio, Mezcal Nuestra Soledad is comprised of six distinct mezcals from six different producers located in various regions of Oaxaca, intended to highlight elements of terroir in mezcal production. Oaxaca is one of the most geographically diverse states in Mexico, with a wide array of microclimates, vegetation, and ecosystems. Nuestra Soledad is made using 100% agave Espadín, cultivated in the remote mountain areas around the Valles Centrales region of Oaxaca, alongside wild vegetation and planted in varying soil types, resulting in an array of flavor profiles. Even more importantly, each mezcalero employs his own methods, often passed down through the generations. Every decision impacts the final character of the mezcal. The environmental diversity, combined with the human element of mezcal production, result in six unique mezcals, despite all six being made from a single agave variety: Espadín.