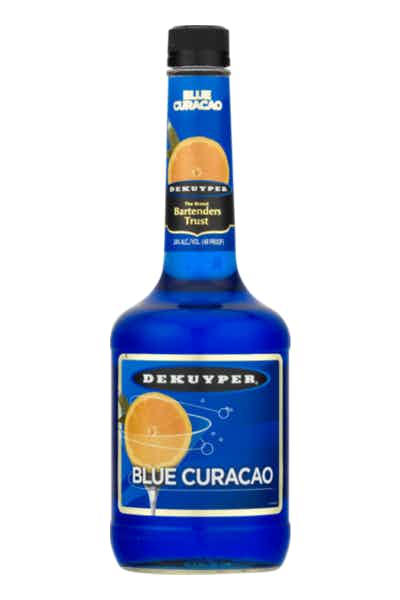 Elementary and world famous, DeKuyper® Blue Curacao Liqueur is a solid basis for creating classic cocktails. Synonymous with island flavor, this DeKuyper® favorite is harmoniously blended from distilled extracts of oranges, lemons, and Curacao fruit. The essence of this liqueur is the Curacao or Lahara fruit, famous for being bitter. Balanced for sweetness, this blue liqueur is incredibly useful in crafting distinctive drinks.

While its bright blue coloring is somewhat misleading (re: food dye), blue curaçao is actually an orange-flavored liqueur; the bright, citrus profile comes from a species of orange (called Lahara fruit) grown on the Caribbean island of Curaçao. Blue curaçao recipes use the Lahara fruit peels rather than the juice — the peel contains the fruit’s essential oils, which creates a much more intense, concentrated orange flavor. This blue treat tastes very similar to triple sec (though you might notice a slightly more bitter flavor). The two can easily substitute for one another in popular tropical cocktail recipes.
Depending on the brand, a bottle of blue curaçao will contain between 20-40% alcohol (DeKuyper’s Blue Curaçao clocks in at 24% ABV). Traditionally, curaçao was made using brandy (which has an ABV between 35-60%), but blue curaçao is typically much lighter on the booze. In fact, most varieties of blue curaçao rely on a neutral sugar cane alcohol that’s then augmented with citrus ingredients and blue dye. Blue Curaçao’s bright coloring makes it look like a flavored syrup, so many don’t realize that it’s actually a liqueur and contains moderate alcohol content.
While the two liqueurs are technically different, you can easily substitute blue curaçao for a triple sec (or vice versa) in a cocktail recipe; if using triple sec, you might consider adding a touch of blue food dye as well to achieve the turquoise appeal of blue curaçao-based beverages. Both blue curaçao and triple sec fall into the category of orange liqueurs made from neutral sugar-based alcohol distilled with orange peels. Triple Sec differs slightly in its distillation process and tends to be a little sweeter than blue curaçao (not to mention triple sec lacks the latter’s blue hue).
For hosts who love a tropical cocktail, you might consider gifting a bottle of blue curaçao for their home bar; blue curaçao is very affordable and certainly a fun ingredient, but it’s not typically a standalone spirit. Instead, consider gifting a bottle of blue curaçao alongside a nice vodka and some fresh lemon juice (all available on Drizly, by the way), and mix up some Blue Lagoons for the party. You might also consider gifting a bottle for a housewarming soiree since blue curaçao and other flavored liqueurs make an entertaining addition to a home liquor cabinet.
Enter a delivery address