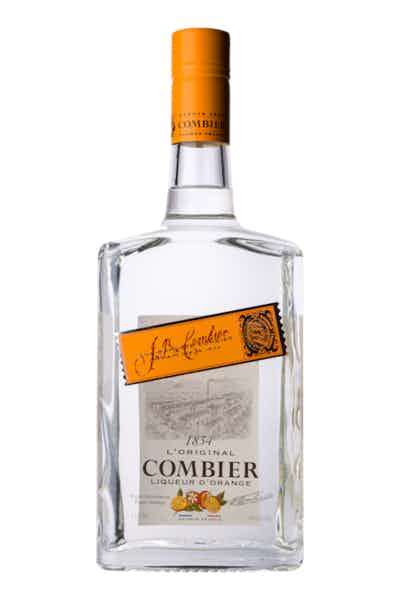 Original Combier, the world’s first triple sec, is made according to the exact specifications of a proprietary recipe created in Saumur, France in 1834 by Jean-Baptiste Combier and his wife Josephine. Over the years, many have attempted to imitate the authentic taste of Original Combier using synthetic flavoring, shortcuts in the production and distillation process, or alterations in alcohol content – all to no avail.

The term “triple sec” is more a description of the process by which the liqueur is made rather than a specific product, and as such, Cointreau is a version of triple sec. In 19th-century France, tropical fruit flavorings were rare and highly coveted; Jean-Baptiste Combier’s orange liqueur (the original triple sec) enjoyed immediate popularity, and a rival confectioner family, the Cointreau’s, decided to throw their proverbial orange-flavored hat in the ring.
Edouard-Jean Cointreau crafted his own style of the sought-after triple sec product with a higher ABV and more forward orange flavor; Cointreau’s liqueur is the best-known triple sec in the world today.
In the 19th century, the traditional recipe for triple sec used a beet sugar-based alcohol combined with sundried, Caribbean orange peels; only unripe, bitter oranges were used in the original recipe, as the greener fruits contained more essential orange oil in the skins. The resulting taste is bright, zesty and citrusy, though some modern triple sec products are actually quite sweet. Like many French liqueurs, triple sec was originally designed to be a digestif, something indulgent to sip neat after dinner or with dessert, but today, it’s most often combined with popular cocktail recipes to deliver a hardy punch of citrus flavor.
Triple sec is an orange-flavored liqueur, but there are other kinds of orange spirits that do not necessarily qualify as triple sec; most orange liqueurs are made using a sweeter alcoholic base (often rum or brandy) and then steeping pungent, bitter orange peels.
Other well-known orange liqueurs include Blue Curaçao, (a Dutch liqueur that uses lahara fruit peels and blue food dye) and Grand Marnier (a French creation that combines Cognac brandy and bitter orange liqueur).
Most orange-flavored liqueurs are affordable and easy to find, and you can opt for any orange liqueur in lieu of triple sec in your preferred cocktails.
Triple sec is a popular orange-flavored, clear liqueur featured in your favorite, indulgent cocktails including cosmopolitans, mai tais, Long Island iced teas and margaritas; while a pervasive product no doubt, most recipes call for just a small amount of triple sec, thanks to its bright and bold flavor.
Like so many other liqueurs, triple sec’s success can be credited to the French — in the early 19th century, a confectioner named Jean-Baptiste Combier and his wife Josephine experimented with steeping exotic Caribbean orange peels in sugar cane alcohol. The resulting liqueur, called “triple sec,” actually applies more to the triple distillation process than the specific product.

Combier® L'Original Liqueur d'Orange is a triple sec liqueur that blends three varieties of West Indies sweet and bitter oranges, sugar from Normandy beets, Paris alcohol, plus various Loire Valley spices, making it all-natural. It appears clear in glasses and forms an even oily coat with long legs after swirling. L'Original Combier is a triple sec liqueur with a history of more than 180 years, which explains its complexity, depth and nuances. Its nose gives off an aroma reminiscent of the oranges that serve as a key ingredient. The L'Original orange liqueur has a rich mouthfeel that gives it a sweet yet bitter citrus taste with hints of spices. It's a citrus liqueur that has a 40% ABV to make it a recommendable mixer in cocktails. It's also good on ice cream and in cooking sauces. You can add this drink to your home bar by utilizing these links to search for Drizly in your city and look for liquor stores near you.