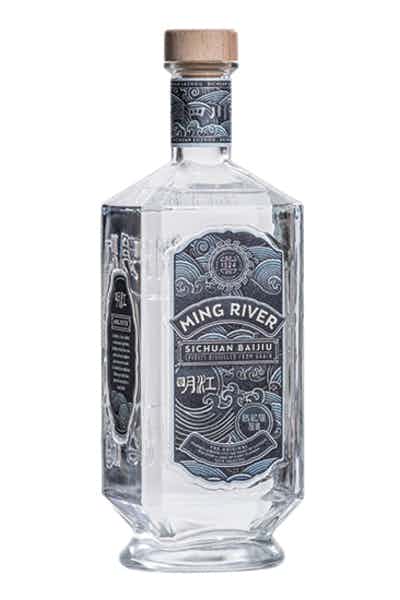 A balanced and complex spirit, Ming River is the original Sichuan baijiu. Each batch starts with locally harvested red sorghum grain and the purest waters from protected wells. It is fermented in earthen pits with naturally harvested yeast cultures native to Luzhou that impart the distinctive terroir of Sichuan style baijiu. After two months, the mash is unearthed and distilled in small batches using a traditional Chinese pot still. The spirits age for up to two years before the master blender balances them into Ming River’s distinctive flavor. The result is an uncompromisingly bold spirit with notes of pineapple and anise with a lingering finish. Perfect neat alongside spicy cuisine or in a cocktail, this baijiu evokes Sichuan with each sip.

Baijiu is an East Asian grain alcohol that usually weighs in between 70 and 120 proof. Also known as shaojiu, this liquor is colorless and can vary in flavor profiles across a wide range of fermentation techniques. The most common grain for baijiu is fermented sorghum, though it can be made from a wide range of different grains like wheat, millet, barley or glutinous rice — it all depends on the region and who’s making it.
Alright, Westerners, brace yourselves: baijiu can be a challenging taste at first. Most describe its flavor as “funky” — a more honest description might even include the words “rotting fruit” — and it has a nuttiness that contributes to a complex, unique, sweet-savory flavor. This flavor comes from a thousands-of-years-old tradition that’s been passed down through generations.
A baijiu maker usually starts by cooking sorghum and then fermenting it with a starter called jiuqu (the very same fungus used in the production of sake, miso and soy sauce). The fermented sorghum then goes through saccharification and further fermentation. Finally, the spirit is distilled and flavored according to local customs and makers’ preferences.
Enter a delivery address