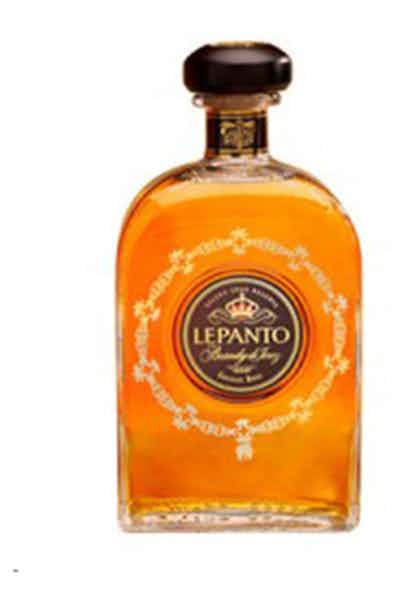 The only Brandy de Jerez produced 100% in Jerez, Lepanto is presented in a decanter-style bottle designed especially for the brand, decorated by hand based on designs from the "Real Fabrica de la Granja". Dry, delicate, complex and persistant. Extremely elegant. Very fragant, notes of old oak. Made from 100% Palomino grape distillates at 60 degrees, denominated "holanda".

Brandy is a general term for fruit-based spirits often associated with after-dinner conversations augmented by dusty books, tobacco pipes and fancy dinner jackets. Many well-known styles of brandy, like Cognacs and Armagnacs, are highly regulated, grape-based and originate in France, but the overall brandy industry has little regulation; brandy may be produced anywhere in the world and varies dramatically in color and recipe using a variety of fruit (often apple, peach, cherry or plum).
Brandy is predominantly sweet and fruity, generally between 40-50% ABV and often aged for several years before its final blending and bottling.
Following its initial fruit distillation, raw brandy is pretty unpalatable and requires several years to mature and develop its remarkable flavors; even so, the exact amount of time to age a brandy can vary dramatically.
Some more regulated types of brandy, including Cognac and Armagnac, are required to age for a minimum amount of time in oak barrels, though most distillers opt to age their brandies for significantly longer, which improves the quality and undoubtedly raises the price per bottle. On the whole, brandies are aged between three to five years, though some premium varieties surpass 10 years or more.
Brandy can be made from a variety of fruit juices, and each country generally has its own preferred style of brandy; in France, most well-known brandies are made from white grape juice, whereas America’s signature brandy is made from apple cider.
Besides apples and grapes, other popular fruits employed in brandy making include plums, cherries, peaches, apricots and pears; it’s a truly varied liquor depending on the geography and the culture where it’s crafted.
Aging brandy in charred oak barrels helps further develop its complex flavors, as well as the final blending process by which water and other brandies are balanced and combined.
Like many after-dinner spirits, brandy is meant to be sipped neat at room temperature, though served on the rocks is equally appropriate; traditionally, brandy is poured into a “snifter,” a specific type of stemware with a wide base (for swirling) and a narrow top (for sipping).
Keeping the brandy a bit warmer or adding a little water can further develop the aromas and overall flavor.
Brandy is a popular ingredient in fruit-based cocktails as well, like colorful sangrias and zesty sidecars; because of its sweetness, brandy tends to appear in dessert recipes, often soaked with coffee in delicacies like tiramisu.
Enter a delivery address