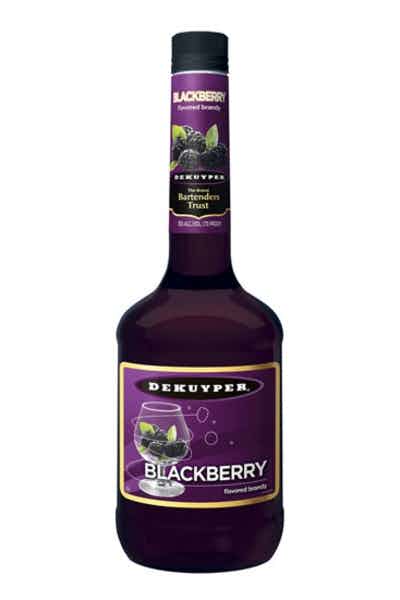 Crafted with extracts of blackberries blended with fine brandy, DeKuyper® Blackberry Flavored Brandy makes a mouthwatering treat. Only the finest fruits are selected and specially blended to bring out the full-bodied blackberry taste. Sip it on its own for a smooth, full-bodied drink or balance your favorite cocktails with its deep blackberry flavor. Perfect in any season, accentuate the flavors of fall by blending it with a pint of hard apple cider or a Bramble in summer, melding its berry taste with gin, fresh lemon juice and sugar syrup.

Depending on the culture and available ingredients, brandy appears as different iterations around the world, its recipe adjusting accordingly to each region; after all, brandy is a common term for any fruit-based spirit (though it’s more often associated with the more luxurious versions, like Cognac and Armagnac).
The brandy industry does not subscribe to many strict standards, though some brandies rely on only fruit for their characteristic sweetness — most commonly grapes, apples, cherries and peaches — whereas others may employ additional sweeteners. In general, a sip of brandy starts with a strong alcoholic flavor followed by a mellow, fruity dessert-wine sweetness alongside notes of oak and vanilla from the aging process.
There are several brandy flavors to try depending on the country of origin and the fruit and other ingredients used. The more classic, high-end brandies are made from white grapes and aged for several years in oak barrels; accordingly, many of these craft brandies originate in the well-known wine-growing regions of the world, such as France, Spain and even the United States’ West Coast.
Brandy-makers can experiment with any number of fermented fruits as their base, but the most common brandy flavors include peach, apricot, cherry, plum, pear and apple — some popular U.S. brands, specifically Paul Masson, produce a line of brandies with trendy fruit flavors like pineapples, mango and red berry.
Brandy flavoring is a clear, pungent extract ideal for desserts and baking; it’s designed for those wishing to avoid alcohol (mostly) and the associated cost of purchasing a real brandy. With flavoring, you can indulge in the distinct, concentrated taste of brandy without additional liquid in your cake or sauce recipes (one teaspoon usually does the trick).
Brandy flavoring is similar to vanilla extract in that a small amount goes a long way in a recipe depending on the quality of your product; look for natural and plant-based flavorings that create the signature oak and caramel notes of aged, high-quality brandy.
Enter a delivery address