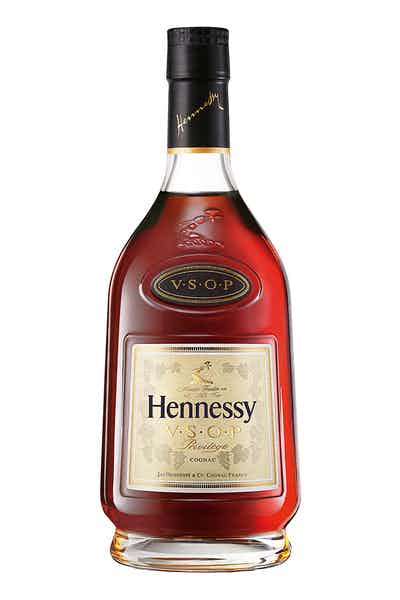 In the esteemed global cognac market, you expect to hear a list of French-sounding surnames (i.e., Rémy Martin and Courvoisier). Yet, the best-selling cognac in the world is attributed to an Irishman by the name of Richard Hennessy. The Hennessy cognac house began producing spirits in 1765. The line today features several expressions, including the Hennessy V.S.O.P Privilege (V.S.O.P stands for Very Special/Superior Old Pale and denotes that the youngest cognac in the recipe is at least four years old). In fact, Hennessy was the first to craft a VSOP cognac, per a request from King George IV.
Hennessy VSOP Privilege was literally fit for a king, so it’s traditionally enjoyed neat to best appreciate the cognac’s taste and aroma. As with most cognacs, you should serve this spirit in a tulip-shaped glass to maximize the ability to swirl and sniff the liquor. You could, of course, add ice and serve in a tumbler instead. Should you aspire to try this cognac in a cocktail, Hennessy recommends the VSOP Privilege Sour: add 1.5 oz Hennessy VSOP Privilege, lime juice, lemon juice, and simple syrup in a shaker full of ice before straining into a tumbler glass.
Age is much more than a number in the world of cognac. Craft distillers carefully blend dozens of brandies that differ in age to achieve an exceptionally complex finished product. Hennessy VSOP Privilege is a combination of 60 different Eaux-de-vie -- some of which are aged up to 15 years in French oak casks. The result is a careful melange of older flavors like licorice and oak balanced with younger, brighter notes of fruit and spice.
A bottle of Hennessy VSOP Privilege cognac will cost you roughly $60, so it’s a moderately pricey spirit; however, you’re purchasing a respected brand that never cuts corners so you can feel confident in the investment. Bring a bottle for a special birthday or singular celebration that warrants a few late-night tumblers beside the fire (perhaps a wedding or retirement party). That said, be sure that the gift recipient is a fan of brandies and other aged spirits, as Hennessy VSOP Privilege’s flavors are especially complex and robust.

Since its founding in 1765, Hennessy has been guided by a passion to craft the world’s finest Cognacs - our drive to Never stop. Never settle. Composed of 7 members including the Master Blender, the Committee tastes, rates and selects the eaux-de-vie that will eventually be blended into Hennessy Cognacs. The oak used to make our barrels comes exclusively from the Limousin forest in France, which provides the correct maturation for our Cognac. Hennessy’s eaux-de-vie differ from one year to the next due to weather patterns. Nevertheless, the Master Blender, Renaud Fillioux de Gironde is charged with faithfully repeating the unique taste of Hennessy Cognacs year after year, uncompromising on quality.

Hennessy Cognac is crafted with a strict set of standards defined by the Master Blender and handed down from generation to generation. However, when it comes to enjoying Cognac, we haven’t followed any rules since 1765.

Created in Louisville, Kentucky in 1881, the Old-Fashioned found its spiritual home at the Waldorf-Astoria Hotel bar in New York City. Cognac, warm and aromatically spiced, a dash of bitters and sweet syrup all blend perfectly to make up this legendary cocktail.

This classic cocktail originated in the Ritz Hotel Bar in Paris. Festive, refreshing, and aromatic, its citrusy notes are timeless. Simple does not equal boring.

Inextricably linked to the Kentucky Derby, this icy summer drink is also synonymous with the American South. Hennessy V.S.O.P Privilège reminds us of its iconic status.

The Sazerac, named after a famous bar in Louisiana, was created in 1850 by Aaron Bird, an inspired mixologist. The cognac’s warmth and spices, coupled with the bitters and balanced out by crisp notes of lemon, blends with the absinthe perfectly.