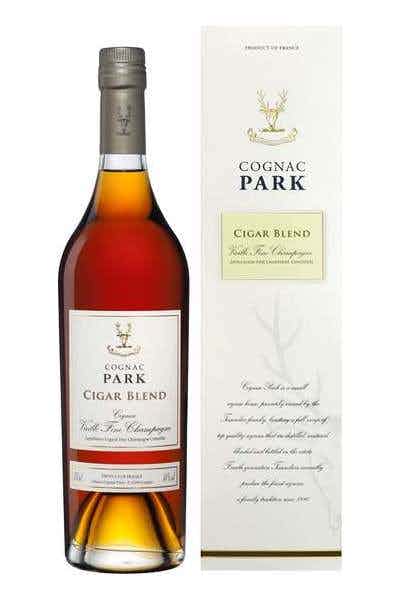 Cognac and cigars have always been enjoyed together. In fact, many cognacs are described as having a cigar box or tobacco aromatic note. Thus, Maison Tessendier set out to make a Cognac that was unabashedly cigar-friendly, which means it’s a Cognac of high intensity, with a big, fruity character. Much of that comes from aging; to create Park XO Cigar Blend, Distillerie Tessendier blends Cognacs from Grande Champagne and Petite Champagne that have been in the barrels with a medium toast, for a minimum of 30 years, predominantly in humid cellars. The Cognac Park brand was created in 1995 and, at that time, was a new project between the Tessendier family and Dominic Park, a Scotsman who sought out the Tessendier family for their generations of experience in the Cognac trade. The distillery itself was founded in 1880, when Gaston Tessendier tended his family vineyards located in the prestigious growing area of the Borderies, acting on his ambition to create outstanding Cognac. Single-mindedly, Gaston learned to work his vineyards and later, with the help of his son, began distillation of his wines. The company has remained in the Tessendier family through four generations. Today, the current family estate remains at Domaine Du Buisson, its original site, housing the family’s vineyards and winery. It is composed of more than 25 hectares in the heart of one of the most exclusive growing regions, the Borderies.

Cognac is a type of brandy that takes its name from the Cognac region of France. Made from twice-distilled white wine, Cognac is distilled in copper pots and aged in wooden barrels. The production techniques of Cognac are very specific, requiring a particular type of grapes, distillation practices and aging requirements.
Hennessy is a Cognac that is made in France but was started by an Irishman. Despite the common belief that Hennessy is a type of whiskey, it is made from grapes — grapes that have been twice-distilled and aged. The only notable similarity it bears to whiskey is that both are aged in oak barrels.
Cognac consumed as an appetizer is usually served neat. It’s also common practice to add a little bit of water, which makes the drink fruitier and more floral. Some water can also help to bring out the subtle spiciness of Cognac while also making it a bit smoother to drink.
Enter a delivery address