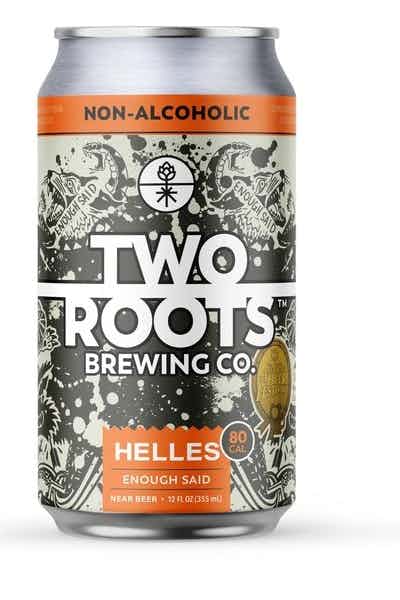 Two Roots Brewing Co. Non-Alcoholic Craft Lager, "GOLD" medal winner at the 2019 and 2021 Great American Beer Festival, is firmly rooted in its German tradition, our golden non-alcoholic helles is made with only Pilsner Malt and Hallertau Hops. This clean refreshing near beer is perfect for any occasion. Understood and beloved worldwide - Enough Said. Good to Know: Winner of the Gold medal at the Great American Beer Festival® Largest Beer Competition in the U.S. in 2019 Low Calorie Rich in Vitamin B12 Filled with Electrolytes and Carbohydrates Premium Isotonic Beverage

Non-alcoholic beer is, as its name implies, delicious beer with nearly zero alcohol content. Its mission? To lovingly reproduce the flavor, character, mouthfeel and other beer characteristics without all the alcohol. You’ll find that the majority of non-alcoholic beers are lagers, though some low-alcohol ales have also come into being in recent years. Non-alcoholic beers are made using reverse osmosis or distillation, which extracts ethanol from beer. The beer is then forced by high pressure through a membrane, forcing out water and alcohol molecules and leaving behind the good stuff (flavor and calories).
Under ideal conditions, non-alcoholic beer tastes like regular beer. However, you must be choosy because inferior non-alcoholic beer can venture into the “beer-flavored water” camp pretty quickly. At worst, non-alcoholic beer can taste like unfermented wort, which is the sweet liquid that forms the foundation of beer but hasn’t yet been fermented. A good non-alcoholic beer can taste fantastic, delivering subtle flavor notes without the booze. Many breweries are innovating special techniques to create flavorful, refreshing beverages with hops, malts and everything else you love about beer.
Non-alcoholic usually isn’t a literal term. Most non-alcoholic beers have trace amounts of alcohol in them, always around 0.5% alcohol by volume (ABV) or less as required by law to maintain the “non-alcoholic” moniker. That’s about the same as kombucha. Some brands claim to offer beer that is truly 0.0% ABV, though most will include a footnote claiming their beers contain no more than 0.5% alcohol. That’s certainly not enough to get you tipsy or drunk and is completely safe to consume before driving.
Because non-alcoholic beer is made to mimic a wide swath of the beer world, the food you pair with it depends on what beer you’re drinking. In general, you can’t go wrong with foods that are savory — particularly dishes like spaghetti and meatballs, which includes saltiness, sourness and rich sauce and goes better with a flavorful non-alcoholic beer (particularly one with good carbonation). The bitter notes of a good non-alcoholic brew also complement greasy, oily meals like pizza. You’ll seldom go wrong pairing them with Thai, Indian and other south/southeast Asian cuisines.
Don’t overthink it — go for the American pint glass. This 16-oz. piece of glassware is the glass to rule them all, a sturdy, hefty vessel that will allow your favorite non-alcoholic brewsky to flourish and work its magic. If you’re venturing into the fruitier side of things, you can choose a beer glass with a narrower rim to effectively funnel the aromas into your nostrils. Headier beers may do well in a goblet or snifter. But again, the American pint glass will never fail you.
Just because it’s non-alcoholic doesn’t mean it’s going to be non-caloric. Indeed, your standard 12 oz. glass of non-alcoholic beer hovers around the same marks as standard beer, with around 100 calories and 19.1 grams of carbs per serving. Compare that with your average beer, which has about 150 calories but only 13 grams of carbs. It’s okay, though. You’re getting delicious flavors and subtle tastes without having to worry about the effects of booze. That’s worth it for a few extra carbs.
Enter a delivery address