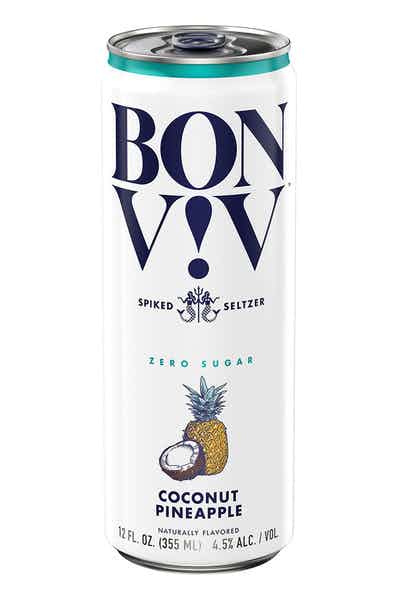 Sweet and tangy – the flavors of coconut and citrus will transport you to a tropical island paradise. The slightly sweet and nutty coconut flavor pairs perfectly with the overtly sweet and tart pineapple taste for the perfect balance of flavor and refreshment.

Hard seltzer — otherwise known as spiked seltzer, adult seltzer, mature seltzer and even hard sparkling water — is a drink that contains carbonated water, alcohol and flavorings. The flavors of hard seltzers are usually fruity. Hard seltzer’s alcohol is made by fermenting either cane sugar or malted barley. The main appeal of hard seltzer, other than its refreshing carbonation and delicious flavors, is that it doesn’t contain a lot of sugar, carbs or calories. That makes it a fantastic alternative to other alcoholic drinks like beer.
Hard seltzer is just carbonated water, alcohol and added flavors, so its flavor will be dictated by whatever flavor you choose. In general, a hard seltzer will hit you with a smooth, fruity flavor that’s light on the alcohol taste and more focused on the fruit itself. You can expect a good deal of fizziness in a hard seltzer and the fruit flavor will range from subtle to medium. If you’re used to drinks like Polar and LaCroix, you can find that type of vibe all across the hard seltzer spectrum — light sweetness and a good dose of tart fruitiness. Hard seltzer makers generally tend to opt for a natural and clean taste.
Hard seltzer’s alcohol content is straight down the middle of the road, ranging between 4% and 6% alcohol by volume (ABV). That puts it in line with your average beer, which has 5% ABV. Note that certain hard seltzers have higher alcohol contents, sometimes up to 12%, though this is at the hands of the maker. In general, the alcohol content of hard seltzer isn’t meant to dominate the flavor, but merely complement the fruity taste of the drink.
Hard seltzer is a generous beverage — it plays well with just about anything. If you’re looking for something that really slaps with seltzer though, look no further than foods that enjoy a dash of acidity. Think anything you’d squeeze a lime over or splash vinaigrette onto. You can try dishes like calamari and shrimp, tossed salads and fried fish. Hard seltzers also go well with cheeses like feta, queso fresco, mozzarella and burrata. If you’re having a cookout or grilling meat, you can’t go wrong with a hard seltzer.
Hard seltzers can have fun in just about any glass, but if it had to pick, it’d probably pick the champagne flute. If this seems an odd choice, consider the design of the flute. It’s meticulously built to maintain carbonation and put fruity aromas in your nostrils. The long stem lets you hold it without warming the drink (and hence without releasing the carbonation), while the narrow glass minimizes surface area for carbonation to escape. That same narrow shape also directs the delightful citrus aromas to your nose when you drink.
Hard seltzers are famously light on the calories and carbs. In fact, you can expect your average hard seltzer to contain 2 grams of carbs or less — compare that with 13 grams of carbs in your average 12 oz. serving of beer with a similar ABV. Hard seltzers also only contain around 100 calories per serving, compared with around 150 calories for a beer. That’s a lot of refreshment and fruity deliciousness for such a small calorie/carb count.

Creamy coconut, sweet pineapple, zesty lime, and Zero-sugar BON V!V Spiked Seltzer. This is the frozen cocktail to make when you want to be transported from your studio apartment to your own private island.

We know it has “Sunshine” in the name, but we’d drink this cocktail year round. With zesty lime juice, sweet pineapple wedges, and refreshing Coconut Pineapple BON V!V, this seriously delicious cocktail is made to impress, without the stress. Did we mention you get to put a leaf in it?