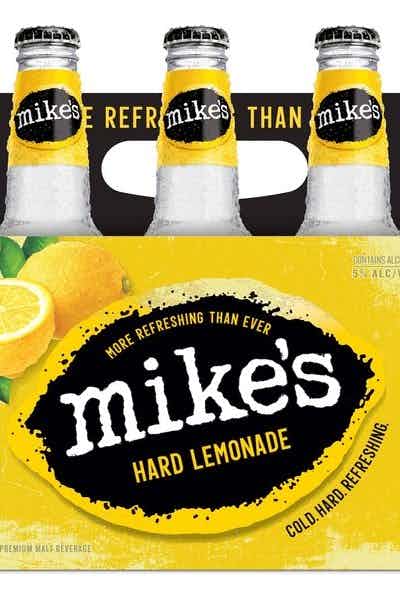 We started the Mike’s Hard Lemonade Company with the single aim of creating the most refreshing & amazing tasting beverages.  Every bottle of Mike’s is bursting with flavor and with each blend of lemon and fruit flavors, we like to think we’ve captured a little bit of sunshine in a bottle!  For more information about our beverages, please visit mikeshard.com. Thank you for choosing Mike’s and cheers to drinking on the bright side! – Mike

Hard lemonade is a delicious, refreshing beverage consisting of lemonade and alcohol (and whatever else creativity inspires its makers to add). You can expect it to taste a bit more tart than regular lemonade due to the alcohol content, which is generally the same as a bottle of beer. However, lemonade is sour to start with, so the addition of malty flavor and even carbonation won’t drastically affect the taste. Hard lemonade is a flavored malt beverage and falls under the category “alcopop,” or alcoholic pop drinks.
Hard lemonade tastes like regular lemonade but can be more sour. Lemonade is sour to begin with — it’s made with lemons, after all — but the addition of malt flavor and alcohol content (around the same as the average beer) does have a noticeable effect on the taste. However, it’s surprisingly close to regular lemonade. If you’re not a fan of strong alcohol taste, hard lemonade is a good choice for you. It’s sweet, refreshing and carbonated, making it a great choice for a hot summer day.
Hard lemonade hits the same mark as your average beer: around 5% alcohol by volume (ABV). That alcohol doesn’t feature super prominently in its flavor profile, though. Hard lemonade tastes a lot like regular lemonade, perhaps a bit more sour due to the addition of malt flavor and alcohol. But it’s a great choice if you’re looking for a not-too-heavy drink for a hot summer day.
Hard lemonade is one of the friendliest alcoholic drinks out there and tastes good with so many foods it’s hard to name them all. The rule of thumb is this: if it benefited from a squirt of lime, it would go well with hard lemonade: think shrimp, calamari, fish and chips, tossed salads. Then there’s the whole world of cookout foods: hot dogs, juicy burgers, hot wings, grilled chicken and so on. Hard lemonade is wildly refreshing and eager to complement just about anything you’d care to eat.
Hard lemonade doesn’t take itself too seriously, so it might surprise you to learn that the champagne flute is the best glass to enjoy it in, particularly if it’s carbonated. Wait — hear us out. The champagne flute is made to preserve carbonation and funnel fruity flavors to your nose. A long stem keeps your hard lemonade cool, so the carbonation doesn’t leach out into the air. That narrow glass concentrates the citrusy aroma in your nostrils. But listen, if you just can’t stomach the idea of drinking hard lemonade out of a champagne flute in front of your friends, opt for the American Pint Glass. It’ll serve you well.
Hard lemonade sure is delicious, and that deliciousness doesn’t exactly come cheap: it packs a whopping 228 calories and 33 grams of carbs per 12 oz. serving. Compare that with your average 12 oz. serving of beer with similar alcohol by volume (ABV), which has around 150 calories and 13 grams of carbs. Hard lemonade is heavy on the good stuff because it needs to be sweet and flavorful, and because it probably includes malt. But it rewards you for taking on the extra calorie/carb load because it sure is fantastic.

From the first Mike's cracked open in 1999 to the variety packs sold across the country today, every bottle of Mike's was created to serve one purpose: make your day a little brighter. Because Mike's drinkers don't do sad. Happiness comes naturally. No off-the-shelf flavoring here. We developed all 15 Mike's flavors from scratch, using real fruit juice and hand selected lemons. Happy, meet quality.

Try These Mike's Recipes for Happiness

Refresh with Mike's Hard Lemonade that balances slight carbonation with tart lemons to give it a delicious sweet and sour taste. With a 5% ABV, Mike's beverage becomes a viable option for individuals who want alcoholic beverages with a touch of sweetness. The citrus notes of the flavored beverage combine well with nutty meals including Walnut romesco and macadamia. It contains real fruit juice with no off-the-shelf flavoring, resulting in a natural taste. This malt beverage contains a minimal amount of gluten to cater to drinkers with dietary restrictions.

Use a pint glass or mason jar when serving this refreshing lemonade. Use these links to search for Drizly in your city, and look for liquor stores near you on Drizly.