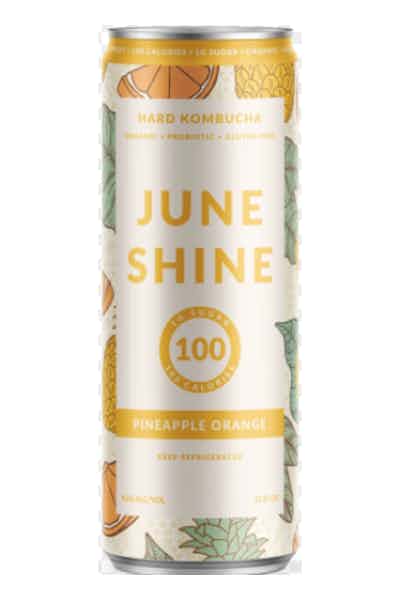 Revel in this refreshing remix of our signature hard kombucha. Its stripped-down flavor formula means you can do more sippin’ without trippin’. It’s light - made right!

Hard kombucha is the normal kombucha you love, plus alcohol. Kombucha, a fermented drink that’s naturally carbonated and has a refreshing, vinegary flavor, naturally has a trace amount of alcohol (usually around 0.5% alcohol by volume). Those numbers get bumped up to adult levels between 4.5% and 8.0% ABV with hard kombucha. The result is a tart, sour, delicious drink that’s easy on the stomach and gluten-free to boot. Because kombucha is so ripe for experimentation, you can choose from a huge array of flavors — think of combinations like blood orange, mint and chili, and you’re on the right track.
Hard kombucha has that vinegary, tart taste that kombucha lovers crave, plus the familiar back-of-the-tongue tang of alcohol. It’s a great drink if you’re a fan of things like sour beers, tart wines or even just vinegar in general. You can think of it as a bubbly tea produced by fermentation. The amount of vinegar in the flavor profile depends on the brewing process, and with an endless canvas for experimentation — think fruits, herbs, spices and more — you won’t run out of new flavors to try.
Hard kombucha can range from 4.5% to around 8.0% alcohol by volume (ABV), putting it in the range of light beers up to craft beers. Note that regular kombucha contains natural amounts of alcohol on its own, usually in the ballpark of around 0.5%. The extra alcohol in hard kombucha comes from allowing additional fermentation (of grains, cane sugar, etc.) with yeast to produce higher ABV levels. This produces a drink that’s carbonated, tangy and loaded with helpful probiotics.
Hard kombucha spans such a wide range of flavors that it’s tough to pinpoint any one food that goes with all of them. Many kombuchas feature citrus fruits like blood orange and grapefruit, so try pairing these with anything that’s better with a squirt of lime — food like tacos, fish and Thai dishes. Fruit kombuchas like strawberry basil go well with Caprese salads, basil, mozzarella, chicken salad sandwiches and spinach salads. Others might go well with meats like chicken or turkey.
Hard kombucha is best enjoyed in a glass suited to that other fruit-forward alcoholic drink, champagne: the trusty flute. The flute is a solid choice because its narrow opening gives the fruity notes of kombucha a direct path to your nostrils, letting you enjoy more focused aromas. It also helps kombucha retain its meager carbonation. However, if you don’t have a flute on hand, opt for the good old-fashioned American Pint Glass. Is it as classy? No, but it’ll do just fine. Plus, it holds a whopping 16 oz. of hard kombucha!
Hard kombucha sports between 5 and 13 grams of carbs per serving and around 100 calories. This makes it a bit higher on the carbs that you might expect for a gluten-free drink and about on par with your average beer (the average 12 oz. serving of beer has 13 grams of carbs). The calories, on the other hand, are significantly lower, as that same serving of beer has 150 calories on average. The point is, you don’t have to feel too guilty about a slug of hard booch.
Enter a delivery address