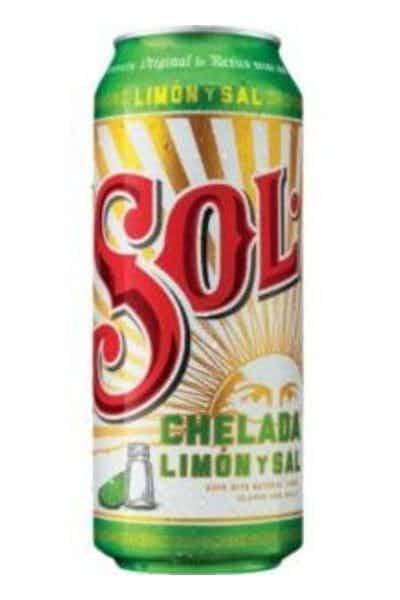 Born in the heart of Mexico in 1899, Sol is the Mexican beer with an optimistic spirit and a crisp, refreshing taste. Our brewmaster took inspiration from a ray of sunlight shining through a hole in the brewery’s roof, then proudly named his new beer Sol which translates to the Sun. Sol is brewed to preserve the beer's freshness, even when displayed in a clear Bottle, for the ultimate quality and taste from Mexico. Sol is the perfect beer to enjoy with friends and family. Enjoy this bright and refreshing lager on favorite holidays with friends and family: Mother's Day, Father’s Day, Cinco de Mayo, Fourth (4th) of July, Mexican Independence Day (September 16th), Halloween, Dia de Los Muertos and winter holiday parties. Share this Mexican import when watching your favorite sporting events like Soccer (Futbol), Football, Baseball or Basketball. Savor every sip while pairing Sol with your favorite backyard BBQ or party. Light & Refreshing. 4.5% ABV.

Shandy and radler are two of the best-known beer cocktails out there, and for good reason. For starters, they both sound like hipster names. But more importantly, they’re great cocktails for a hot summer day. A shandy contains beer — most commonly a blond lager — mixed with a citrus drink like lemon-lime soda or lemonade, usually around a 50-50 ratio. A radler is quite similar except that it can include the addition of other juices, such as grapefruit. For the sake of satisfying your curiosity, radler is German for “cyclist.”
Shandy and radler are peas in a proverbial pod, each bringing a light, fruity effervescence mixed with the bready yum-yum of beer. The difference stems from the fact that a radler is more likely to have additional fruit juices in it such as grapefruit. The primary recipe for both the shandy and the radler is an even mixture of beer (most likely a blond lager) and a citrus fruit drink like lemon-lime soda or lemonade. From there, few people stick to the script and most choose to add other fruity additions to the drink.
Alcohol content tends to be fairly low in a shandy/radler — you can expect around 3.0%. These two drinks are made by mixing a beer (usually a blond lager) in nearly equal proportions with a carbonated citrus drink or lemonade. The radler may be a bit heavier on the beer than the shandy, and though this will have an impact on its alcohol levels, in general, you can expect these two drinks to hover around the 3.0% mark. That makes them great for light occasions like an afternoon refreshment or even a brunch mixed drink.
Shandies and radlers are essentially just mixtures of beer and carbonated citrus drinks like lemon-lime soda or lemonade, so you’re better off choosing light fare. For meat, lean towards dishes like fish or white meat (chicken specifically), particularly when they’re flavored with herbs and spices. Mascarpone cheese is another great choice. You may also find a shandy or radler to pair well with certain heavier dishes. They can be delicious with pork and duck or pickled dishes.
The best glass to drink a shandy or radler in is the flute. Typically associated with champagne, the flute is a narrow, tall glass that’s meant to preserve carbonation and concentrate fruity aromas toward your nose. Both a shandy and a radler are made by mixing a 50-50 ratio of blond lager beer and carbonated citrus soda like lemon-lime soda or lemonade. However, there’s usually some creative license at play — many mixologists (amateur and professional alike) throw in other fruity additions. A flute lets you get the most out of both the bubbles and the delightful citrus.
A summer shandy (or its close cousin, the radler) is light as far as calories and carbs go, with around 130 calories and 12 grams of carbs per 12 oz. serving. For comparison, take the average beer, which has 150 calories and 13 grams of carbs. A shandy/radler pulls off this feat based on the fact that it’s about half beer and half carbonated fruit juice. That light calorie/carb count gets you refreshing flavor, sweetness, tartness and everything else this afternoon drink has to offer.
Enter a delivery address