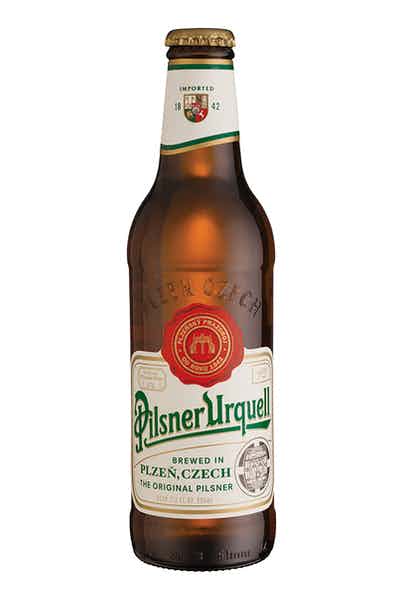 Plzen in the Czech Republic was literally born to make beer. When King Wenceslas II of Bohemia founded the city in 1295, he granted its 260 households the right to make beer. For hundreds of years, this worked great. Yet as might be expect with this many home brewers, quality varied over time. It was easy to get beer but not so easy to get good beer. In 1838, several of the more enthusiastic brewers in town declared 36 barrels undrinkable and dumped them out in front of the town hall. This drove the brewing households to join forces and collectively build a brewery -- The Citizens Brewery of Plzen. The idea was to create a state of the art brewery to put in place a series of new beer making practices that were making their way across central Europe, such as the production of pale malt. Under the main building they dug a network of ice-cooled tunnels for another new technique called laagering (from the German 'lager'- to store). Four years later they revealed a golden clear, crisp, light-bodied beer that blew the doors off the dark and cloudy beers of the time. Pilsner Urquell is still brewed in the same brewery with the same soft Plzen water, saaz hops from Zatec, Czech barley from Moravia, and the same H-strain yeast. We still germinate and malt ourselves, and continue to triple-decoct our mash over open flames. Pilsner Urquell is the World’s Original Pilsner. With aromas of fresh bread, hints of Saaz hops and honeysuckle, taste notes of caramel maltiness balanced by a distinct bitterness, and a nice creamy mouthfeel and smooth, refreshing finish, it is easy to see why the original pilsner is a great session beer. Excellent choice for craft beer and import beer drinkers looking for an authentic, easy-drinking beer. The light beer is perfect for any occasion, such as sporting events, daytime adult beverage activities, warm weather sessionabilty, barbeques, and food pairing occasions that compliment traditional European dishes, as well as neutral flavored salted snacks.Pilsner Beerslightly sweet, caramelized maltiness; honeynut, breadycaramel character; a complex Saaz bitternessPilsner Beer

Pilsner Urquell is under the ownership of Asahi Group Holdings, also known as Asahi Breweries, which gained the beer in March 2017 after regulators required Anheuser-Busch to sell it as part of its acquisition of SABMiller in October 2016. This lager beer is brewed in Plzeň, Czech Republic, at the Pilsner Urquell Brewery and is among the most popular beers coming out of the country. Under Asahi’s ownership, Urquell continues to be available in green and brown bottles and aluminum cans of various sizes.
That depends on how legit you want to sound. Let’s start easy: You can pronounce Pilsner Urquell phonetically as “pilsner” followed by “urkel” (as in Steve). If you want to step it up a notch, try for the Czech pronunciation: “pilsner” (roll the R if you can) “ork-well” (again, roll the R). Throw out that authentic pronunciation in the United States, and you’ll get some raised eyebrows — throw it out in the Czech Republic, and you might be carried around to wild cheers.
According to lowgluten.org, an official test of Pilsner Urquell showed “no indication of the presence of gluten.” Other tests, such as that performed by the Swedish National Food Agency and the Argentine Coeliac Association (ACELA), found that Pilsner Urquell contained less than 20 parts per million of gluten — the threshold for being able to legally describe a beer as gluten-free. This makes the beer a safe bet for individuals who are sensitive to gluten or who have celiac disease.
Pilsner Urquell is an absolutely iconic beer in Europe and in the rest of the world as well, though some beer lovers may not know why: Pilsner Urquell literally invented the pilsner. Born in the Czech city of Plzeň in 1842, this light beer remains one of the finest pilsners around the world nearly two centuries after its inception. Clean and crisp, it is neither simple nor overly complex and boasts flavors of herby hops and sweet malt. It’s a crowd-pleaser that won’t disappoint the discerning beer aficionado, either.
Enter a delivery address