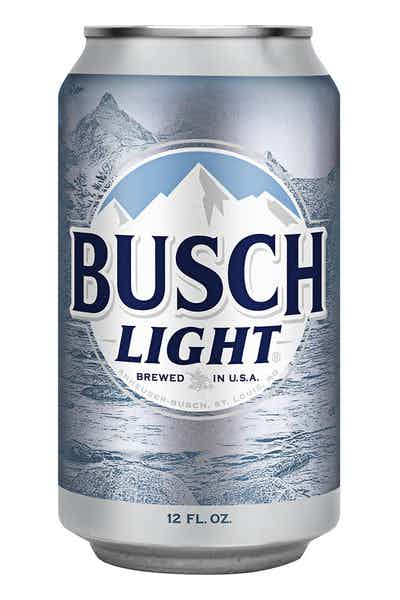 Busch Light Beer is a light bodied American beer that delivers fewer calories and a classic taste. This lager beer is made with a blend of premium American-grown and imported hops and a combination of exceptional barley malt, fine grains, and crisp water to provide a pleasant, balanced flavor. Busch Light Beer contains 95 calories and a 4.1% ABV per serving. Enjoy Busch Light Beer anytime the occasion calls for refreshing drinks; grab a case of beer cans to enjoy while watching sports or hanging out with friends. This lager beer pairs perfectly with your next turkey burger or pizza. The canned beer comes in a convenient case that's easy to take with you anywhere.

Most American light lagers have a relatively low alcohol content, between 2.5% and 5%. Busch Light, which Anheuser Busch first released in 1989, has 4.1% alcohol by volume. As a rule, lagers tend to have a lower alcohol content than ales because the former’s recipe relies on a species of bottom-fermenting yeast that doesn’t do well in high-alcohol environments (conversely, the yeasts in IPAs and Belgian ales thrive in a boozier brew). Busch Light was designed to be refreshing and easy to drink, an ideal beverage for watching daytime sports events or spending the day outdoors.
Take a look at some of the top-selling beer brands in the United States (Bud Light, Natural Light, Coors Light, Miller Light), and you’ll notice something many of them have in common: light. The numbers don’t lie — Americans cannot get enough of these mega-brand light lagers; Busch Light (another staple brand on the American top ten list) falls into this light lager category. American light lagers are defined as low-calorie, low-carbohydrate, but super carbonated brews; they have a relatively mild malted flavor and are meant to be served extra cold for maximum refreshment.
Wheat beers (such as witbiers, Weizenbock, and hefeweizens) are frequently compared to lager-style beers. Both varieties have a light body, tend to be sweeter in flavor, are exceptionally easy to drink, and contain lower alcohol content. Nonetheless, an American light lager like Busch Light is not considered a wheat beer — most notably, Busch Light is a style of lager, and wheat beers more often than not use top-fermenting ale yeasts. Busch Light’s recipe includes barley malt and other grains, while wheat beers must contain a minimum of 30% wheat in the wort.
If you have someone in your life who loves watching Nascar (for which Busch Light is an official beer sponsor) or enjoys spending their days enjoying the outdoors, then a case of Busch Light makes an excellent everyday gift. However, if you’re shopping for someone who prefers a craft brew or a more unique beer style, you may want to steer away from Busch Light. Nonetheless, it is an uber-drinkable beer that anyone can enjoy (not to mention a 30-pack will cost you less than $30).

Busch beer has a long and illustrious history rooted in tradition, exceptional ingredients, and crisp, refreshing taste. It started as Busch Bavarian Beer, made a comeback as the first beer introduced by Anheuser-Busch after prohibition, and to this day it's the only beer that proudly displays our founder's name.