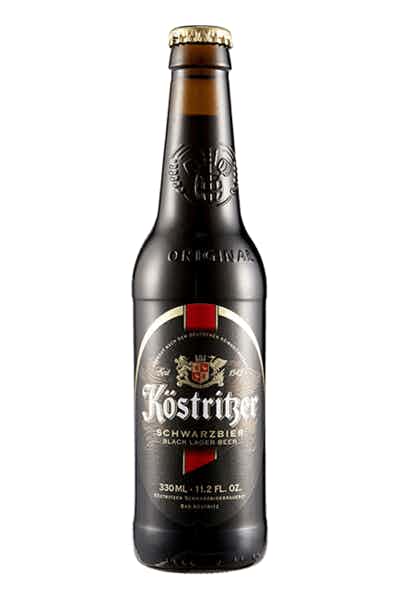 Style: Schwarzbier, or German Black Lager The Köstritzer brewery is located in Bad Köstritz, which is close to Gera in Thuringia. The brewery was founded in 1543 and it is one of the oldest producers of Schwarzbier (black lager) in Germany. One of the most famous drinkers of Köstritzer Schwarzbier was Johann Wolfgang von Goethe, who sustained himself on black beer from Köstritz when he was unable to eat during a period of illness. Schwarzbier means “black beer” in German. It is a medium-bodied, malt-accented dark brew, very opaque and deep-sepia in color, with a chewy texture and a firm, creamy, long-lasting head. In spite of its dark color, it comes across as a soft and elegant brew that is rich, mild, and surprisingly balanced. It never tastes harsh, toasty or acrid. The beer is often referred to as a Schwarzpils, a “black Pils,” but, unlike a blond Pils, which can be assertively bitter, the hop bitterness in Schwarzbier is always gentle and subdued. In a glass, Schwarzbier looks much like a British dark ale, but looks can be deceiving. Schwarzbier, unlike a British ale, has a clean lager taste that leaves next to no perception of fruitiness on the palate. Instead, Schwarzbier produces very mild, almost bittersweet, notes of chocolate, coffee, and vanilla. Like most traditional German lagers, Schwarzbier has a malty middle, but the sweetness is never cloying or overpowering. The beer is moderately to well attenuated and the finish tends to be dry. Its alcohol level by volume is in the range of 4.5 to 5%, rarely higher. To accentuate the Schwarzbier’s dark elegance and appealing head, always serve it in a tall, fluted or tulip-shaped glass. 4.5%—5% ABV. Germany.

When thinking about black beer your mind might go first to stouts like Guinness, but the original black beer in our minds is a lager - Schwarzbier. Black Lager has a lighter body, with roasty dark notes from the malts but a bigger kick of hops adding a more assertive bitterness on top of the roasted flavor.
Schwarzbier (aka black beer) is a dark lager that originated in Germany. It tends to have an opaque, black colour with hints of chocolate or coffee flavors. You might find some similarity to stout due to the roasted malt, which imparts it its dark color.
You can expect Schwarzbiers to have moderate amounts of alcohol -  usually around 5% ABV.
Enter a delivery address