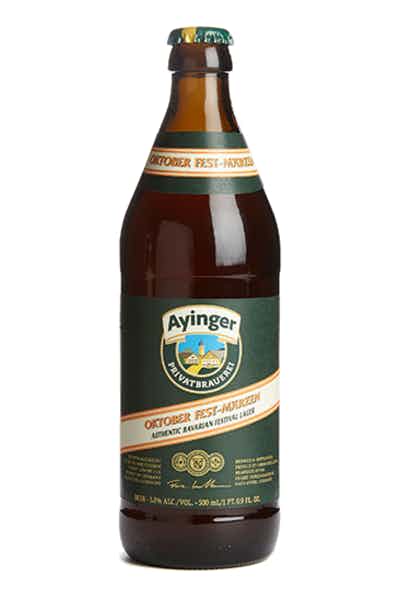 Ayinger Oktober Fest Märzen has a deep golden color tinted with amber. It is lightly sweet with a malty nose balanced with floral hops. Its medium to big body and alcohol is not overpowering. The soft dryness comes from long maturation.

One thing to know about Oktoberfest beer is that it's always a lager. There are, however, two distinct styles of Oktoberfest beers that are worth knowing about. American Oktoberfest beers tend to be Marzen, an amber-hued and slightly sweeter take on your typical lager. If you actually go to actual Germany, however, you'll find the beer to be paler and closer to what you might think of for a more standard lager - this style is closer to what's known as a Dortmunder.
Marzen (aka Marzenbier) is a lager that was originally brewed in Bavaria. It has a medium to heavy body and tends to be reddish or amber colored, though it can range from pale to dark brown. The flavors tend to be balanced between sweet malt and hop bitterness, and you can often expect to smell and taste notes of toasted bread or biscuit (think cookies not buttermilk). There are six German breweries that are allowed to serve beer at Oktoberfest - Hofbrau, Spaten, Paulaner, Hacker-Pschorr, Augustiner, and Lowenbrau.
Marzen has to do with the month of March, when Oktoberfest beers were historically brewed. They were then stored in caves to age, and served in the autumn (y'know...Oktoberfest and whatnot).
Enter a delivery address