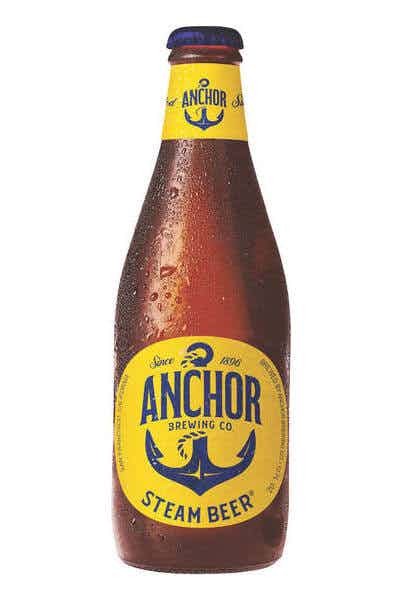 A California common, also known as "steam beer," is brewed with lager yeast but fermented at ale fermentation temperatures (warmer than the cool temps usually used for lagers).
When you taste a California common beer, you'll likely detect a whole lot of of toasted and/or caramel malt character in flavor and often in aroma. Often referred to as “steam beer," this style was made famous in the US by San Francisco’s Anchor Brewing Company.
According to Anchor Brewing, the name "steam" came from the fact that they had no way to effectively chill the boiling wort using traditional means, so they pumped the hot wort up to large, shallow, open-top bins on the roof of the brewery. During this rapid chilling by the cool Pacific Ocean winds, the brewery had a distinct cloud of steam around the roof.

Celebrating California's craft brewing legacy, the Anchor Steam Beer comes from San Francisco. It features California barley, cluster hops and in-house lager yeast. The Anchor Steam beer has a deep amber color with a thick creamy head. This iconic beverage undergoes a special brewing method that gives it a unique character and distinct taste. Brewers blend pale and caramel malts and then ferment these with lager yeast at a warm temperature in shallow open-air fermenters. Gentle carbonation and a special process known as kräusening are the final steps in producing this smooth beer.

This California steam beer has a lovely depth of flavor with considerable hop aromas. It has a delightful taste of caramel with a hint of sweetness that balances the earthy notes for a well-balanced flavor profile. Click these links to search for Drizly in your city, or look for liquor stores on Drizly near you.