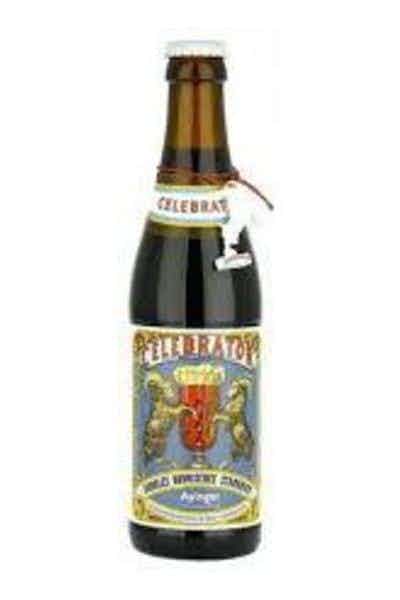 A beer that has a dominant malty taste. This beer’s origins in a monk’s recipe are reflected in its heartiness. The Pope of Beers, Conrad Seidl, describes it as: “Almost black with a very slight red tone, a sensational, festive foam and truly extraordinary fragrance that at first summons up visions of greaves lard. The first taste is of mild fullness with an accompanying coffee tone, which becomes more dominant with the aftertaste. There is very little of the sweetness that is frequently to be tasted with doppelbock beer.” The Ayinger Celebrator has been ranked among the best beers of the world by the Chicago Testing Institute several times and has won numerous platinum medals.

“Doppel” means “double,” so the name "doppelbock" means this style is a bigger and stronger version of the lower-gravity German-style bock beers. Originally made by monks in Munich, this beer style has a rich, malty character and pairs very well with food.
Doppelbock (AKA double bock for non-German speakers) is a stronger version of traditional bock that was first brewed in Munich by the Paulaner Friars, a Franciscan order founded by St. Francis of Paula. Typically, doppelbock is high in alcohol and sweet, especially compared to other lagers.
Doppelbocks live up to their "double" name, with quite a bit more alcohol than standard lagers - usually ranging between 6.5% and 8% ABV.
Enter a delivery address